We recently analysed the attendances of six of Europe’s major leagues: the Premier League, Bundesliga, Primera División, Serie A, Ligue 1, and Eredivisie.

While we looked at these attendances from different types of angles, we left out one analysis that we did, but wanted to present separately. Let’s start by warning that it is a rather light-hearted analysis and should not be taken too seriously.

This analysis deals with the appeal of clubs. Appeal is the quality that makes something attractive or interesting, and in contrast to looking at the home crowds of a club, we can measure appeal a lot better by the crowds they attract away from home.

We all know that certain clubs are more appealing than others. The people of, for example, Seville are far more likely to flock to Estadio Ramón Sánchez Pizjuán or Estadio Benito Villamarin when Barcelona and Messi come to town, than when, say, Levante pays a visit.

We have looked into this, come up with a list of clubs that are particularly appealing, the ones that aren’t, and perhaps the results can provide some conclusions on what makes a club appealing. Of course, most will already be able to fill in the usual suspects, but there are some surprises as well.

While the idea seems simple, the analysis is not as straightforward as it appears and therefore needs a little explanation. We have some further explanation at the end of the article for the statistics buffs.

The first major point is that we have taken the attendance data of two seasons. Why not just one? Well, because we want to filter out “exceptional” and “unlucky” attendances that might disturb the outcomes. We prefer to make conclusions on the general popularity of clubs, and not the popularity in one season.

So why not then use three, four, or five seasons of data? Well, we would have loved to, but we simply only have two seasons in our database, and collecting extra seasons of data would be too much work. After all, it is a fun analysis. Still, we think two seasons give us rather reliable outcomes. The consequence is that we have only included the teams that were in the top league in both seasons (2010-11 and 2011-12).

We have used three metrics to measure popularity as we noticed that if we used just one, the same “exceptional” attendances somewhat influenced the outcomes. These metrics are:

The three metrics all have their advantages and disadvantages, which we discuss at the bottom of the article. While this may all seem very technical, it is best to just look at the numbers to get rid of any confusion.

The tables we present show the scores and ranking of each club on each metric. The clubs are sorted based on the average of the three metrics.

We start with the Premier League (PL): 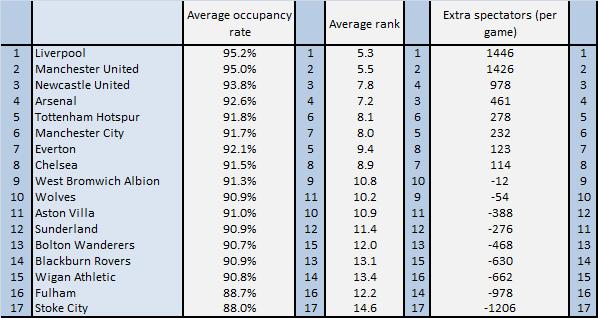 Finally, Liverpool attracted on average 1,446 more people on their away trips than the average of the other teams, again the best in the PL. In comparison, Stoke sold 1,206 tickets less than the average.

Some observations we can make based on the PL data:

It is important to realise that the occupancy rate and extra spectators metric get mainly determined by the clubs that have free capacity, and even more so by those with very volatile attendances. The occupancy rate of the Emirates Stadium is, for example, always close to 100%, whereas the attendances at the Reebok Stadium tend to swing significantly. This, however, does not affect the second metric.

Of course, there are also the away fans a team brings that may affect the numbers, but the data we have makes no distinction and we have therefore left this out of consideration.

Next up is the Bundesliga: 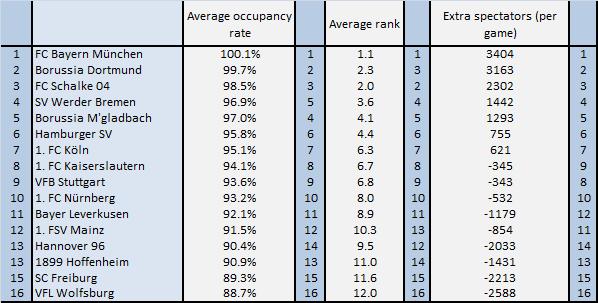 Premier League attendances tend to get reported up to the single seat and even when clubs sell out there are still some differences. In Germany, on the other hand, they often just give the exact same number. This means that multiple teams get ranked first (or all teams in the case of the Allianz Arena), which in turn means that the average rank metric gets skewed upwards (just in case you wondered).

Now the Primera División. We did not manage to get attendance data for the 2010-11 Primera División season retroactively, so only have one season of attendances. It is important to bear this in mind as it makes the numbers much more volatile. 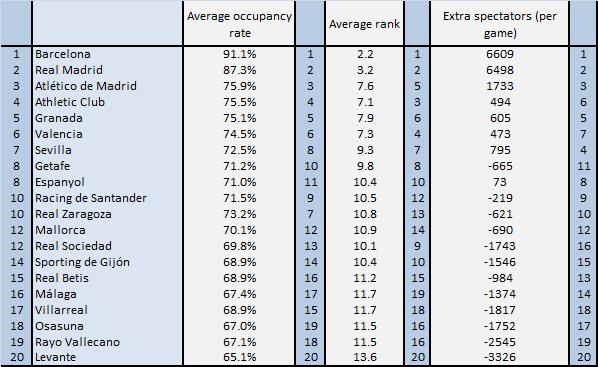 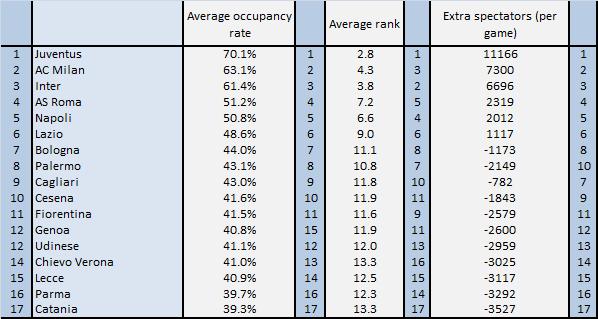 There is a stark contrast between the Premier League and Bundesliga on the one hand, and the Primera División and Serie A on the other. Spain and Italy are both countries where many football fans support one of the few top clubs, irrespective of where they live. This is much less the case in England and Germany, resulting in much less differences between the clubs. This is, of course, even further exacerbated by the significant excess capacity most stadiums in Spain and Italy have. 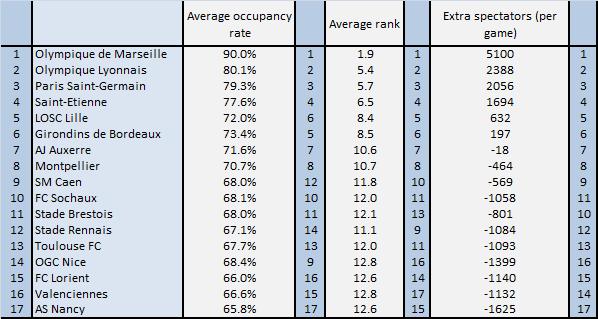 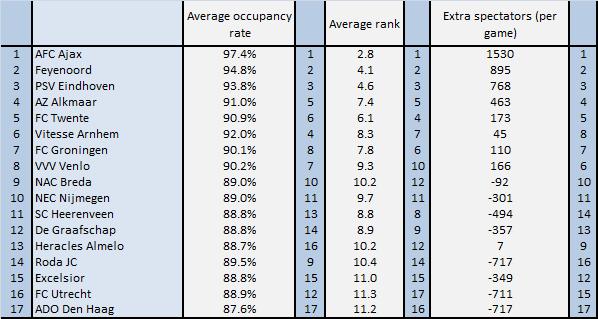 It is no surprise that many of the teams that only played one season in the top league would have ranked towards the bottom of the lists, though Blackpool was very popular in their one season in the PL and Swansea did well last season too. St Pauli also seems a club that can pull in the crowds, as do Lens and Monaco (though more modestly).

If we can take one thing from this analysis, it is likely that a club’s appeal seems to be much more driven by the past than the present. While we saw some effect of increased performance on away attendances for the likes of Gladbach and Paris Saint-Germain, this happens mainly when clubs already have an established past. It is much more difficult for rising teams such as Málaga, Udinese, and Montpellier to gain in appeal.

But apart from giving some fans extra bragging rights, should we place much value on the above analysis? Yes and no, but mostly no. Which is of course because there are many more ways to measure a club’s appeal than just away attendances. Most of all the home attendances (which are very solid for Stoke), but also many further variables not relating to attendances.

That said, measuring a club’s appeal becomes increasingly important, for example in dividing television money, and these numbers could just as well be one of the metrics used to determine such division. They are also likely to correlate significantly with the television audiences a team attracts.

But remember, nobody should be offended by these numbers as two seasons is a relatively short period to properly measure appeal. In the end, it is more just a fun analysis than anything else.

We promised some further statistical explanation for those interested:

We have chosen to use three metrics to measure the appeal of each club as each has its advantages, but also disadvantages: