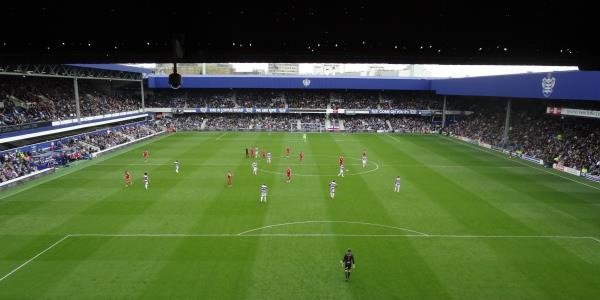 Loftus Road was built in 1904, but it was only in 1917 that QPR moved to the ground. QPR brought one covered seating stand from their previous ground at Park Royal, and the rest of the stadium consisted of open terraces.

Unsatisfied with their ground, QPR moved in 1931 to nearby White City Stadium, but soon moved back to Loftus Road. In 1938, a new covered terrace opened, but further changes were few in the next decades.

In the early 1960s, QPR once again moved to White City Stadium, but moved back after one season.

Loftus Road got its current shape in the late 1960s and early 1970s with the construction of the South Africa Road and Ellerslie Road stands, lifting capacity to about 35,000. In 1980 and 1981, the two stands at both ends were rebuilt.

In the 1990s, the stadium was converted into an all-seater, which reduced capacity to below 20,000 seats.

Between 2002 and 2004, Fulham played their home matches at Loftus Road while Craven Cottage got renovated.

QPR is currently investigating a move to a new stadium, which they want to built at a different location in West-London. No concrete plans have been unveiled yet.

(photos of the present Loftus Road below)

Getting to Loftus Road

Loftus Road is located in the Shepherd’s Bush area in the west of London. The stadium lies about 2 miles west from the western edge of Hyde Park, slightly less than 2 miles west from Portobello Road in Notting Hill, and about 1.5 miles north-west  from Kensington High Street.

If arriving by car from the A40, turn off at White City, turn south onto Wood Lane, and then right onto South Africa Road.

The nearest underground (tube) station is White City on the Central Line. Alternatively, both Wood Lane and Shepherd’s Bush Market station on the Hammersmith & City and Circle Line are a 10-minute walk away.

Furthermore, there is Shepherd’s Bush station on the London overground as well as the Central line, which lies 15 minutes walking from the ground.

Finally, bus 283 (from Barnes) to Bloemfontijn Road, and bus 72 (from Putney Heath), 95 (from Southall) and 220 (from Wandsworth) to White City all pass the stadium in the close vicinity.

Loftus Road is located in London’s Shepherd Bush area, which has a reasonable variety of restaurants of different cuisines, most of which are on Uxbridge Road. There are a few pubs mixed in as well, and the nearby Westfield Shopping Center is one of the largest of Europe and has over 60 eating and drinking options. Alternatively, the Notting Hill and Kensington areas are neither far away.

There are no hotels directly near Loftus Road, but a lot of options near Shepherd Bush and Goldhawk Rd tube stations. The J West Hotel, Grantly Hotel, Ibis Shepherd Bush, and Royal London Hotel are all less than 15 minutes walking away, get good reviews, and offer rooms for less than £100.00 a night. There are many more options though, which you can find here.

Alternatively, the not-far-away Bayswater area is a favourite for tourists on a more modest budget and just a short tube ride away. The Kensington area will be convenient for those that have more money to spend.

If tickets remain available, these can also be bought at the box office before the start of the match. While QPR does not sell out every game even in the Premier League, it is advised to book tickets in advance.

Ticket prices depend on the opponent, with those for the cheapest category priced from £30.00 to £35.00 for a seat behind the goal and between £30.00 and £50.00 for a seat at one of the sides. Prices for top matches start at £50.00. Some restricted view tickets can be slightly cheaper, but are not recommended.