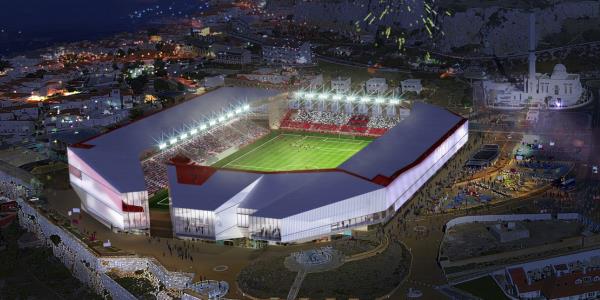 Europa Point Stadium was a planned new national stadium of the country of Gibraltar. The desire to build a new national stadium came forth out of Gibraltar becoming a member of UEFA in 2013, but not having the appropriate facilities to host Euro qualifying matches on their home territory as their traditional home, Victoria Stadium, did not meet UEFA standards.

The project was initiated by the Gibraltar Football Association, who would own the stadium and was projected to cost up to £40 million.

Europa Point Stadium would have had a limited capacity of just over 8,000 seats with further VIP facilities and skyboxes. The stadium would have formed part of a larger complex featuring bars and restaurants, retail shops, a museum, and viewing points towards Africa.

The stadium had been designed by architect Mark Fenwick, who had previously been responsible for the design of Espanyol’s Estadi Cornella-El Prat and Valencia’s Nou Mestalla.

Europa Point Stadium would get built at the southern tip of the rock of Gibraltar called Europa Point, at a site that is presently occupied by a cricket ground.

Following years of playing at Estádio Algarve in Portugal, the Europa Point Stadium project got cancelled when the Gibraltar FA decided to buy and renovate Victoria Stadium instead.