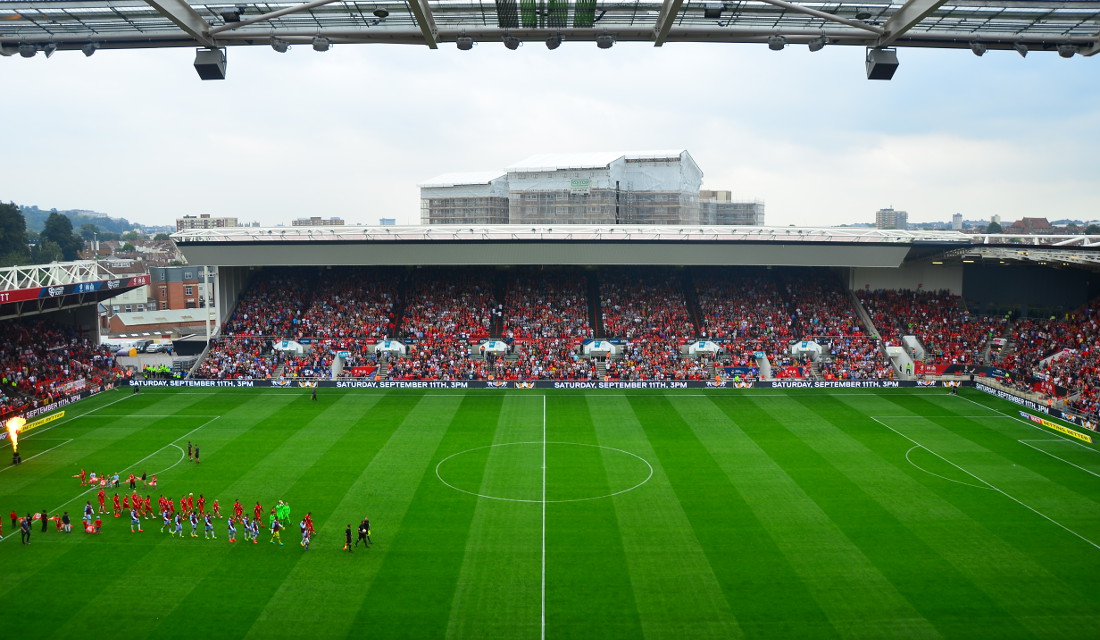 Ashton Gate Stadium was the home of Bedminster FC until they in 1900 merged with Bristol City. The merged club first moved to Bristol City’s ground at St John’s Lane, but in 1904 back to Ashton Gate.

The ground was gradually developed in the following years and in 1913 hosted an international between England and Wales. Ashton Gate set its record attendance in 1935 when 43,335 people attended an FA Cup tie versus Preston North End.

In 1958, a new main stand, the Williams Stand, opened. Twelve years later, in 1970, the new Dolman Stand was built on the opposite side.

The ground remained largely unchanged until the 1990s when it got converted into an all-seater. At the same time (in 1994), the new Atyeo Stand was built behind one of the goals. One year later, a new lower tier got added to the Dolman Stand.

In the 2000s, Bristol City started exploring the possibilities of building a new modern stadium. Plans were made for a 30,000-seater just south of Ashton Gate in the Ashton Vale area, dubbed Ashton Vale Stadium, but heavy resistance of local residents and environmental groups first delayed and ultimately cancelled the plans.

In late 2013, Bristol City instead presented plans for the redevelopment of Ashton Gate, first as a back-up for the Ashton Vale plans, but since April 2014 as their principal plans.

Over a period of two years starting in the summer of 2014, both the Williams and Wedlock Stand got rebuilt, while the other two stands got refurbished. The works were completed in 2016 and raised capacity from 21,000 to 27,000 seats.

(photos of the present Ashton Gate below)

How to get to Ashton Gate

Ashton Gate Stadium is located on the south-western edge of the city of Bristol, about two miles from the city centre and the main Temple Meads rail station.

On matchdays a special shuttle bus service runs from Temple Gate near Temple Meads station to the stadium. It runs one hour before kick-off and buses return after the match has finished.

From the city centre you can furthermore catch city bus 24 (from The Haymarket) or regional buses X1, X3, X4, X6, X8, and X9 (from Bristol Bus Station).

Tickets are also available at the stadium on the day of the match. Bristol City only very occasionally sell out.