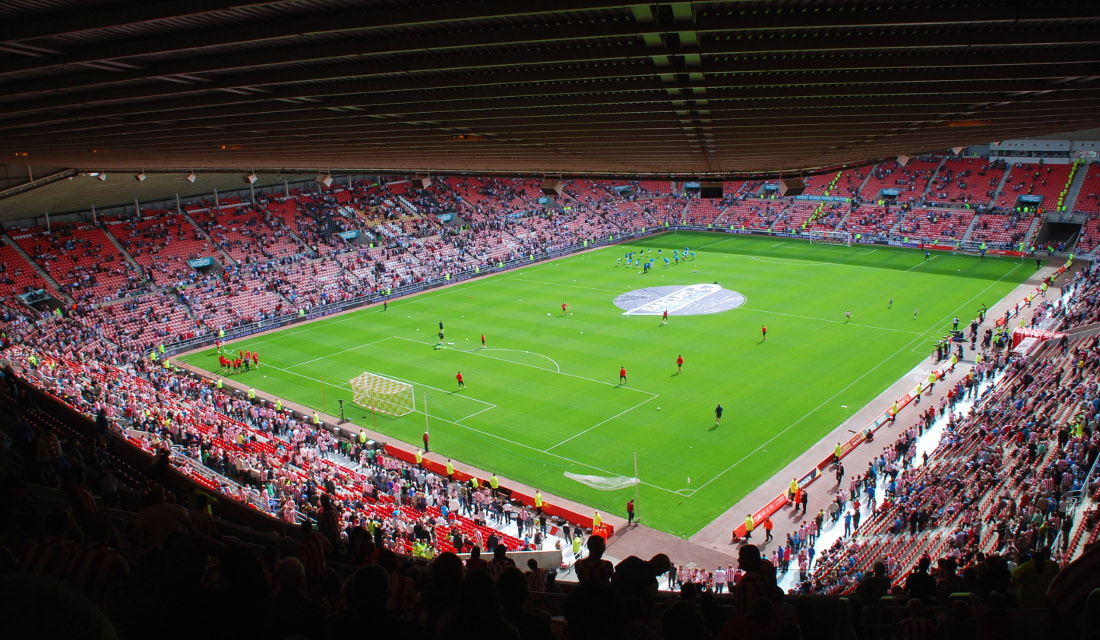 The Stadium of Light was built in the mid 1990s as a replacement for Sunderland’s old Roker Park, which lacked the possibilities for further expansion and modernisation.

The Stadium of Light was built at a site a few hundred metres away from Roker Park and initially had a capacity of 42,000 seats.

How to get to the Stadium of Light

The Stadium of Light stands on the north bank of the River Wear. Sunderland’s city centre, located on the south bank, is just a 15-minute walk away, as is Sunderland’s main railway station.

Eat, drink, and sleep near the Stadium of Light

The Stadium of Light is located in a typical British urban area, and while there are a few places around to get a drink or something to eat, e.g. at North Bridge St., you can just as well do this in Sunderland’s city centre. which is a short walk away.

There are not many hotels in Sunderland, and none in the immediate vicinity of the stadium. In the city centre Mowbray Guest House seems a very good alternative. Theoretically at walking distance, but also close to the metro.

Alternatively, you can also pick one of the hotels on the North Sea coast, from where it is a 20 to 30-minute walk to the stadium. The Best Western Tavistock Roker Hotel and Roker Lodge are two options. The Balmoral & Terrace Guest Houses gets excellent reviews, but require at least a three-night stay.

For all hotels near the Stadium of Light click here. Of course, if you do not care about regional rivalries, you can also stay in nearby Newcastle and catch a metro to the stadium. You can find the options in Newcastle’s city centre here.

Tickets are also available at the ticket office before kick-off. Sunderland typically only sell out the Tyne-Wear derby and possibly one or two other high-profile matches per season.

Sunderland offer guided stadium tours round the stadium that include a visit to the players’ lounge, dressing room, players’ tunnel, and dugouts. The tours last just over 60 minutes.

Tours run roughly once a month and more often during the summer holidays. For exact dates, availability, and bookings check the Sunderland website or call the Tours Hotline +44 (0) 191 551 5055.

Photos of the Stadium of Light