Oh, how times can change. Let me give the word to Peter Storrie, ex-chairman of Portsmouth FC:

Portsmouth is moving into a new dawn with the backing of owner Alexandre Gaydamak and these are very exciting times for the club both on and off the field.

The new stadium, along with plans for the club’s new training ground at Titchfield, is proof of where we want Pompey to be – playing at the highest level and in a stadium that is reflective of a top Premiership side.

This was April 2007, said during the presentation of one of Pompey’s many stadium plans, though arguably the most ambitious of all.

The announcement came off the back of a two-year-long silence, which had fans anxiously await whether the previous set of plans were going to be realised.

These previous plans did not envision a complete new stadium, but a relatively modest redevelopment of Fratton Park.

Fratton Park had been the home of Pompey since they got founded in 1898. The stadium got further developed in the 1920s and 1930, which included the construction of the present main stand designed by Archibald Leitch. It, like so many English stadiums, reached its peak in the early 1950s, from where is was a slow slide downhill toward the 1980s. In contrast with so many other English stadiums though, it hardly got redeveloped in the 1990s, with only a new all-seater stand at the Fratton End to show for.

First plans for a new stadium had been made as early as 1970 when Pompey chairman John Deacon wanted to build a new stadium on an old airfield. The 1970s were no good times for building a new stadium in England though, and nothing came of it.

Chairman Jim Gregory was the next chairman to have a go at a new stadium, this time in the more stadium-friendly early 1990s. He set his eye on the site of the St. John’s playing fields in the north of the city, but later learnt that building a new stadium and breeding Brent Geese do not go well together.

Things got more serious though, when Milan Mandarić took reign in Portsmouth, and in 2003 plans were presented for a massive overhaul of Fratton Park. The redeveloped stadium was matched with and financed by a residential and retail development dubbed Pompey Village.

The pitch of Fratton Park would get turned 90 degrees, two new stands built, and the existing main stand and relatively new West Stand redeveloped. This would result in a capacity of about 35,000 seats. 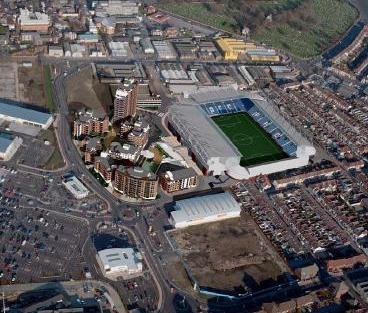 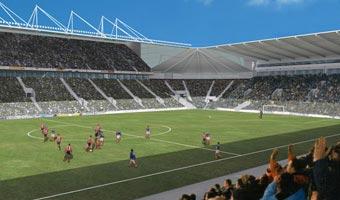 This is what Mandarić said at the time:

We wanted to create a development that was modern, stylish and impressive to complement the new stadium and I believe that is exactly what we have achieved.

But for our wonderful football fans we are creating a magnificent stadium accompanied by a lovely development that will be eye catching and thoroughly modern.

And the wonderful concept behind Pompey Village means that the club will be able to stand self sufficiently on those two feet without in later years being crushed under a [debt] burden that cripples it.

Turned out they did not need a new stadium to achieve that.

The project was generally well-received, and while initial hopes of works starting in early 2004 were unrealistic, the club did obtain planning permission in the end of 2004. Works were scheduled to begin in the next year, but then the two-year-spell of silence set in, broken occasionally by meaningless statements like:

At this time there is nothing more to add. The club is aware that fans are keen to know what the latest is. As soon as we have any more details we will inform the fans.

Then, in January 2006, French businessman Sacha Gaydamak arrived at the club, and a few months later became the sole owner. This prompted the hope that things would speed up, which in turn proved to be in vain.

This led a commenter on a Portsmouth bulletin board to remark:

This subject is become more long winded than the Spinnaker Tower.

If only he knew how much more long-winded the subject would become.

Suddenly, in April 2007, everything changed when Peter Storrie made that announcement that Portsmouth would be moving to a new stadium. Off were the plans for Pompey Village, and instead some spectacular drawings were shown of a new stadium in Portsmouth’s city centre at a location called The Hard.

Gaydamak had assigned renowned architects Herzog & De Meuron, who had just completed the Allianz Arena, with the task to design a state-of-the-art stadium on a site that would get dredged up from the harbour, and which lay squeezed in between the Naval base and the regenerated Gunwharf Quays.

The stadium would be able to hold 36,000 spectators and the £600 million project was to get financed by 1,500 luxury apartments on the site and the development of the old Fratton Park land.

Portsmouth historic asset is its Docklands, they formed the city, they were its foundation and still sustain its economy. The wateredge is the heart of the city. It’s more recent but other great asset is its football. It too provides its own energy for the city and the community. With this project these two existing ingredients are combined to create a new contemporary icon for Portsmouth. The energies of the past are joined together in order to make the future city attractive for its residents and visitors. Waterfront, football and housing converge to form a unique public space, moving the city and its people back to the water. This is a contemporary move but one which is born from tradition, the English tradition of a Football Club being integrated within its neighbourhood. 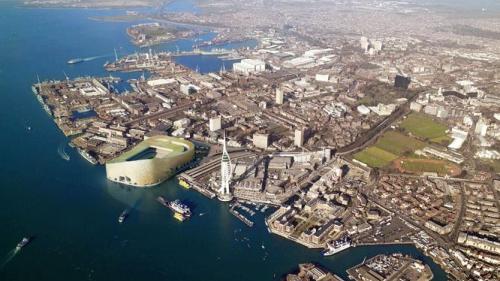 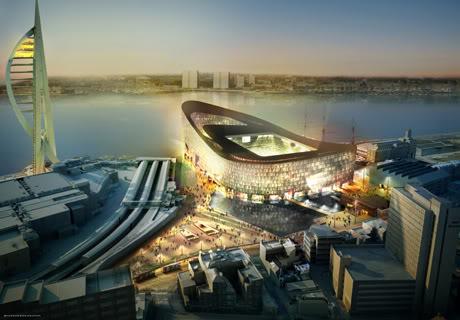 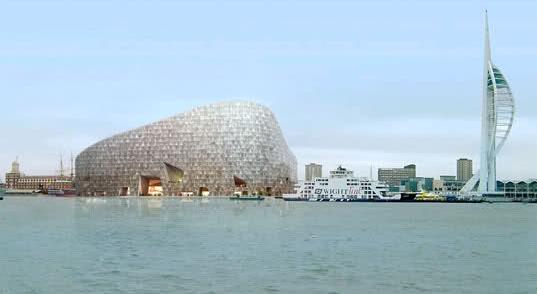 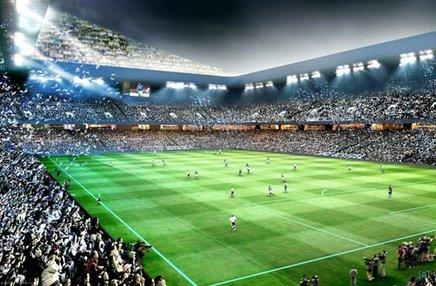 It, however, seemed as if Portsmouth had forgotten to talk with local council members as these were little enthusiastic about the project. They even managed to come up with a list of 40 concerns, including the impact on the city’s skyline as the beloved Spinnaker Tower would have to share this with the new stadium.

It came therefore as little surprise that only six months later the club announced to opt for a different site instead, this time at Horsea Island further toward the north of the city.

Herzog & De Meuron kept their job though, and described the new project like this:

Portsmouth’s historical asset has traditionally been its connection with the water, and more recently football has become the other great asset of the city. Horsea Island will allow the football stadium to become a visual icon at the gateway to the city, creating a new identity for both Portsmouth and Pompey. It is perfectly situated on the water next to the confluence of the main access roads, allowing a dramatic first view of the stadium with the city behind.

They even dared to mention the earlier deal-breaking Brent Geese:

The site is recognised as being rich in biodiversity, and of particular interest are the Brent Geese that currently use the site to nest and rest. To foster and encourage this use two green corridors are provided connecting the new urban park with the water.

The design for the The Hard site had been purposely asymmetric due to its location, but this was not necessary for the new site and shortly after some new drawings were presented: 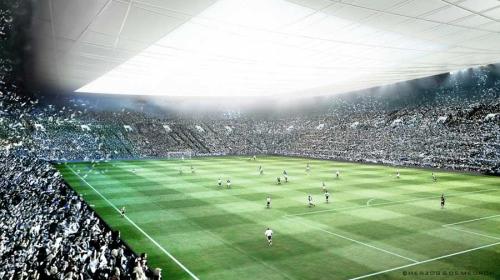 While not being presented with another list of 40 concerns, council members were still not overly convinced of the reshaped plans. In particular the inclusion of retail development worried council members, who feared adverse affects for the retailers in the city centre.

Then the credit crisis set in and financing of the £100 million project turned out too difficult for the now debt-stricken club. New exits from the M275, necessary to reach the stadium by car, also proved to be a problem point.

So in March 2009, two ambitious new stadium projects later, the club went back to the start when they announced to shelve the Horsea Island plans and instead focus on redeveloping Fratton Park. Exactly, the same plans that Milan Mandarić had announced in 2003.

We all know that it went from bad to worse for Pompey since then, and presently nobody is even considering any form of stadium redevelopment. After all, Fratton Park is still reasonably adequate for League One football.

But these stadium sagas never end, and when the day comes that Portsmouth inevitably bounces back and new plans are presented, people will look back at the 2000s and wonder what might have been if things had gone a little different.