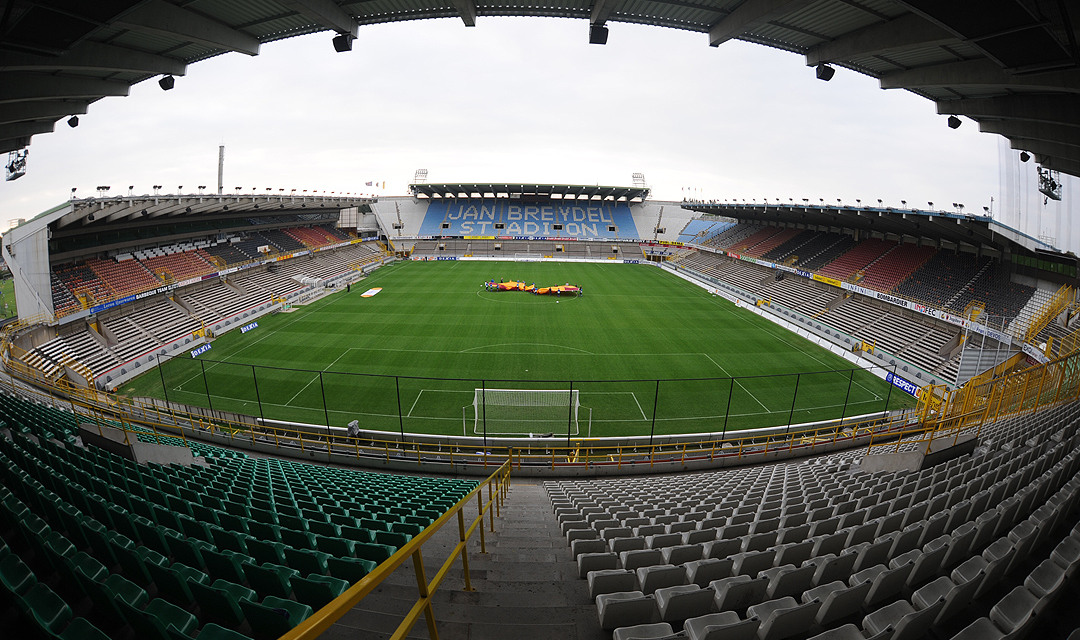 Jan Breydel Stadion got built in 1974 and opened one year later in 1975. The stadium was built by the city of Bruges with the objective of providing both Bruges clubs with a shared home that could replace their separate grounds.

The stadium was initially called Olympiastadion and could hold an estimated 30,000 spectators, though mostly standing.

In the 1990s the terraces of the stadium were converted into seating areas, reducing capacity to under 20,000 seats. As the stadium had been selected as a playing venue for the Euro 2000 championships, it needed to get expanded to a minimum capacity of 30,000.

In order to qualify for subsidies from the Flanders government a more Flemish name was required, which led to the name change to Jan Breydel Stadion, a folk hero from 14th century Bruges.

Building works, which consisted of two expanded stands at the short ends and refurbishments of the two stands at the long sides, were completed in 1999.

During the Euro 2000 tournament Jan Breydel Stadion hosted three group matches and the quarter-final between France and Spain (3-1).

In recent years, Club Brugge have been exploring the possibilities of building a new stadium to replace the aged Jan Breydel Stadion, and after long bureaucratic delays have now become close to realising this. They hope to move into their new home at the start of the 2019-20 season. If these plans go through, Cercle Brugge aim to redevelop the Jan Breydel Stadion into a smaller venue with an approximate capacity of 12,000 seats.

(photos of the present Jan Breydel Stadion below)

How to get to Jan Breydel Stadion

Jan Breydel Stadion lies in the west of Bruges, about 3.5 kilometres from Bruges’ historic city centre and main railway station.

The stadium can be reached by bus. From the main railway station take either line 5 or 15 in the direction of St.-Andries. The ride takes about 15 minutes and it is a further 5 minutes walking from stop Sint-Andries.

Jan Breydel Stadion is located in a rather quiet residential area, though there are a few pubs and places to eat in the immediate vicinity of the stadium, most of all on the Gistelse Steenweg. Of course, the options pale in comparison with Bruges’ splendid city centre.

There are a few bed & breakfasts in the area near Jan Breydel Stadion in case you wish to stay close to the stadium. Click here for the options.

However, if you have a little more time on your hands, staying in Bruges’ historic centre may be the better option. Click here for an overview of hotels in central Bruges.

Tickets for Club Brugge matches can be purchased online, or at the ticket office at the stadium.

On the day of the match the ticket booths at the stadium open from 1.5 hour before kick-off. Club Brugge’s attendances are among the highest in the league, but for most matches tickets will be easily available.

Club Brugge tickets generally range in price from €15.00 for the lower sections behind the goal to €40.00 for the upper sections of the main stand. For the matches against Anderlecht, Cercle, Genk, Gent, and Standard prices are increased to between €20.00 and €60.00.

Tickets for Cercle Brugge matches can be bought online, or at the ticket office at the stadium.

Tickets can also be purchased at the gates of the stadium on the day of the match from 1.5 hour before kick-off. Cercle Brugge hardly ever sells out.

Ticket prices range from €10.00 for a seat behind the goal to €30.00 for a central seat at the main stand. Several sections of the stadium remain closed for Cercle matches.