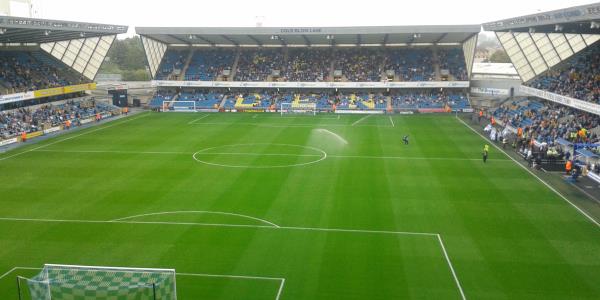 The Den, previously called The New Den, was one of the first stadiums to be built following the Taylor Report and complying with the report’s recommendations. It replaced The Old Den, which was located in the same area.

The Den opened on the 4th of August 1993 with a friendly match between Millwall and Portuguese side Sporting Portugal. The new stadium had come at a cost of £16 million.

How to get to The Den

The nearest train station is South Bermondsey. Trains run from London Bridge Rail Station. The journey takes only 4 minutes and trains run about 5 times an hour.

Surrey Quays overground station is located a 15-minute walk from the ground and can be reached with the East London line of the London Overground.

Tube station Canada Water, which lies on the Jubilee Line, is also within walking distance of the ground, though located a bit further away than Surrey Quays.

There are also several buses that pass in the vicinity of the stadium (on Old Kent Road – a 10 to 15-minute walk away). Bus 21 runs from the City, bus 53 from Parliament Square, and bus 172 from St Paul’s Cathedral via Waterloo Station. In all cases get off at stop Peckham Park Road.

Bus 1 runs from New Oxford Street via Waterloo Station to The Den. Get off at stop Galleywall Road, which is a 5-minute walk from the stadium. Bus 381 stops at the same stop. It runs along the South Bank from Waterloo Station via London Bridge.

Millwall operates two pricing categories. Ticket prices for the most-expensive Cat A matches range from £26.00 for an upper-tier seat behind the goal to £30.00 for a seat at the main stand. Tickets for Cat B matches are £3.00 cheaper.

Photos of The Den