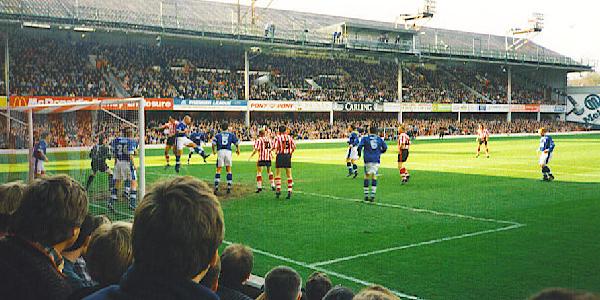 The Dell was for over a hundred years the home of Southampton FC until the club moved in 2001 to the St Mary’s Stadium.

In the 1890s Southampton played at the Antelope Ground, but were forced out in 1896 when property developers obtained the rights to the site. A short stay at the County Cricket Ground followed, but already in 1897 the club announced to have bought a piece of land to build a new football ground.

The Dell officially opened on the 3rd of September 1898 with a match between Southampton and Brighton United (4-1).

The stadium was located in a natural dell somewhat north of Southampton’s central station. The land had been bought of a railway company as the project for a railway line that was to run over it had been abandoned.

The Dell initially consisted of two covered stands with seats and two natural banks for standing. It could hold an approximate 25,000 fans.

The ground underwent a first major development in 1928 when a new West Stand was built. The stand had been designed by Archibald Leitch. One year later a fire destroyed the East Stand, which got rebuilt in similar style as the West Stand.

In the post-war years about 30,000 people could fit in The Dell. Its record attendance was set in 1969 when 31,044 spectators attended a fixture between Southampton and Manchester United.

One of the most iconic parts of the ground in those years was the two-tiered terrace on its southern end. The second tier ran over just half of the end and comprised of three boxes which resembled and were referred to as chocolate boxes.

Due to a lack of space this new stand had an odd triangular shape with the rows of seats running up from a mere six or seven on the left side of the stand to approximately five times this amount on its right side.

At the same time another new stand got built at the other end of the ground and the principal stands got fitted with seats. This reduced capacity to just 15,200 seats and with a lack of further expansion possibilities it was clear that the long-term future of Southampton lay at a new ground.

In 1999 construction began of the St Mary’s Stadium and two years later Southampton moved to their new home. The club played its last official match at The Dell on the 19th of May 2001. The Premier League fixture between Southampton and Arsenal was won 3-2 by the home side, and the last goal was scored by local hero Matthew Le Tissier.

Soon after, the stadium got demolished and replaced by a housing estate. The apartment blocks on the estate have been named after former Southampton players.