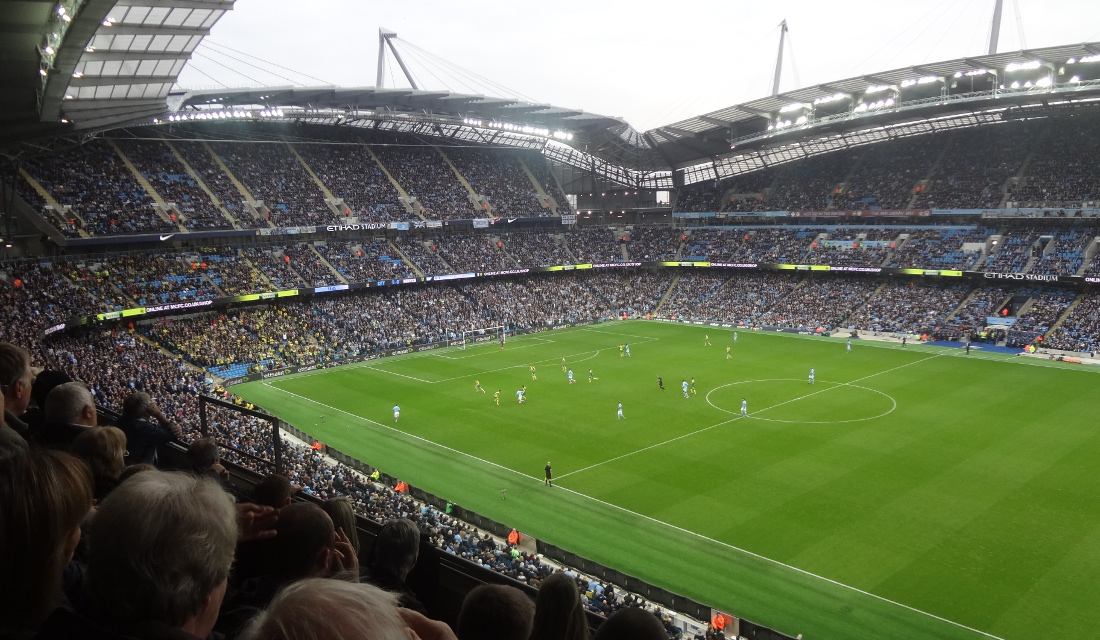 Etihad Stadium, also known as Eastlands, was built for the 2002 Commonwealth Games. Following the games, the stadium was converted into a football stadium as to provide Manchester City with a modern replacement for Maine Road. The club moved into Etihad Stadium at the start of the 2003-04 season.

In 2008, Etihad Stadium hosted the UEFA Cup final between Zenit St Petersburg and Rangers FC (2-0). The stadium was initially called City of Manchester Stadium, but was renamed Etihad Stadium in 2011 following a 10-year sponsorship deal with Etihad Airways.

At around the same time, Manchester City started to conduct feasibility studies into expanding the stadium, first considering ambitious plans to raise the roof and add a complete third tier, but eventually settling on just adding additional tiers to the stands behind the goals.

In the summer of 2014, works started on expanding the South Stand with an additional tier, which boosted capacity with 6,000 seats. At the same time, the club announced plans to add a further 3 rows of seating pitchside, which brought total capacity to over 55,000 seats for the start of the 2015-16 season.

If there is sufficient demand, the club may add a third tier to the North Stand as well, which will raise capacity to an approximate 61,000 seats.

How to get to the Etihad Stadium

The walk from the city centre to the stadium takes about 30 minutes, and that from Manchester Piccadilly Station 25 minutes. Follow the City Link signs.

It is quicker though to catch the metrolink from either Piccadilly Station or – for example – Market Street in the city centre. Take a train in the direction of Droylsden and get off at stop Etihad Campus right next to Etihad Stadium. The journey takes 8 to 10 minutes.

If arriving by car, the stadium can best be reached from the M60 (running east from the city). Take either junction 22 or 24, and drive east towards the city centre. From there on, follow the signs for Sportcity.

The area around the Etihad Stadium is not one of the best of Manchester, and apart from the odd pub there are few options for eating and drinking.

The city centre is at walking distance though, and one can therefore just as well eat and drink there and then walk or take the metrolink to the stadium. There are some bars around Piccadilly Station, closest to the stadium, but other nightlife areas such as the Northern Quarters, The Printworks (both north of the center), Deansgate Locks (south), or around the Town Hall are not too far away either.

Alternatively, there are plenty of options near Piccadilly Station, though most come in the high-end category. The Portland by Thistle, Premier Inn, Britannia Hotel, and Mercure are some of the cheaper options. Of course, there are plenty of options elsewhere in the centre, and the stadium is easily reached by public transport. Click here for an overview of all hotels in Manchester.

While Man City does sell out most high-profile matches, tickets for most other matches are rather easily available, especially if booked in advance.

If the match is sold out, you can get hospitality tickets through either viagogo or Stubhub. These tend to be rather reasonably priced so are even worth a shot if you fancy trying out a slightly upgraded experience.

Tours run every day of the week between 10:30 am and 3:30 pm (3:00 pm on Sundays), though different schedules can apply, in particular on matchdays.