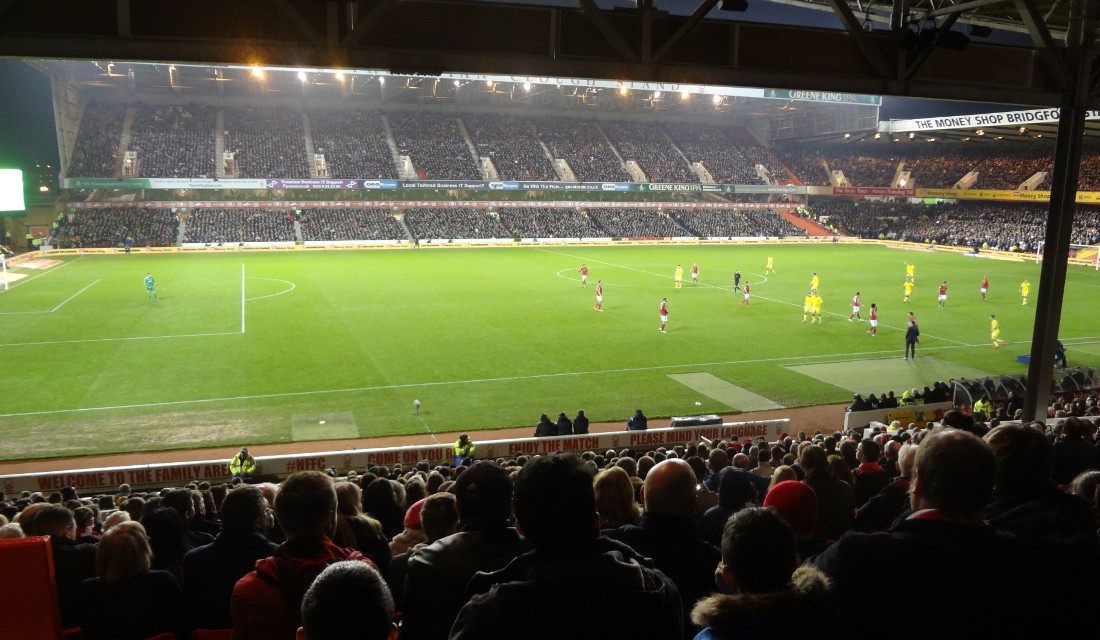 Nottingham Forest moved to the City Ground in 1898 after unsuccessfully trying to find a permanent home in previous decades.

The City Ground officially opened on 3 September 1898. It was initially a rather small ground consisting of mainly wooden stands.

Some improvements were made in the following decades, mainly in expanding the terraces, but the ground only really started to develop from the 1950s. The first was a new East Stand (later Executive Stand), which opened in 1957.

The opening match of the new East Stand also meant a new record attendance for the City Ground. A total of 49,946 people saw Forest play Manchester United that day.

In 1962, a fire heavily damaged the wooden main stand, but it was successfully restored. Six years later, another fire completely destroyed the same stand, which was subsequently rebuilt. The stadium could at that time hold about 43,000 people, of which 17,500 seated.

Developments continued in the early 1990s with the construction of a new all-seater stand at the Bridgford End and in 1994 with the new Trent End at the other end of the ground.

The City Ground was one of the playing venues of the 1996 European Championships, during which it hosted three first-round group matches.

In recent years, the club has investigated the possibilities of building a new stadium. These at one time became rather concrete as part of the England 2018 World Cup bid, but the failed bid and recurring resident opposition at proposed sites have thus far halted any progress.

(photos of the present City Ground below)

How to get to the City Ground

The City Ground is located in the south of Nottingham on the banks of the river Trent. It is situated at just 1.5 miles from Nottingham’s rail station and only slightly further from Nottingham’s Market Square. The walk will generally take less than half an hour.

The stadium is across the road from the historic Trent Bridge Cricket Ground, and lies only a few hundred metres away from Meadow Lane, the home of Notts County that is located on the other side of the river, making them the two closest stadiums in England.

On the day of the match tickets can be bought from the ticket office at the Brian Clough Stand. Forest only very occasionally sell out.

Tours run a few times a month usually at 10:00 am on a weekday. Check the official website for the current schedule.

Bookings are required and can be made via email tours@nottinghamforest.co.uk. The tour costs £8.00.

Photos of the City Ground