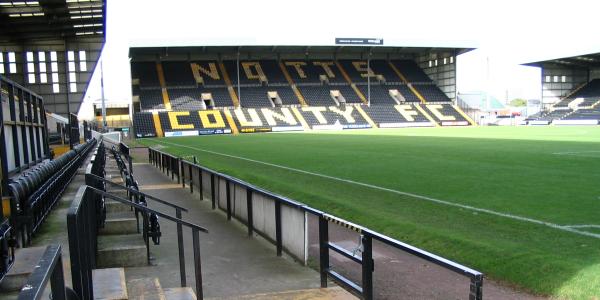 In their early years Notts County used to play at the Trent Bridge Cricket Ground, but when their lease was not renewed in 1910, they were forced to find a new ground. The club rented a site on the other side of the river Trent at Meadow Lane, which they got ready to play for the start of the 1910/11 season.

Meadow Lane initially consisted of only one stand, but was soon expanded with earth banks and a newly built main stand. A new County Road stand was built in 1925.

The Kop was extended after the War, and in 1955 Meadow Lane recorded its highest attendance when 47,310 people watched an FA Cup match against York City.

In the following decades Notts County’s successes dwindled and a precarious financial situation meant that no changes were made until the ground received some small refurbishments in the 1970s.

By the end of the 1970s the stadium had slowly fallen into disrepair though, and in 1978 the old wooden Meadow Lane Stand had to get demolished, but was only replaced by a brick wall. At that point the capacity of Meadow Lane amounted to just under 24,000 places.

A sudden rise in sportive successes in the early 1990s brought the opportunity to extensively redevelop Meadow Lane. Works started with building a new stand at the empty gap where once stood the Meadow Lane Stand, and continued with the rebuilding of The Kop and County Road Stand.

The redevelopment of Meadow Lane got completed with the reconstruction of the Main Stand in 1994.

(photos of the present Meadow Lane below)

Meadow Lane is located just south of Nottingham Rail station and the city centre. The stadium lies very close to Forest’s City Ground, with only the river Trent separating the two.

By car, coming from the M1 (west or south), take exit 24 and get on the A453 towards West Bridgford and Wilford. Continue following the signs for Wilford on the B679 until you arrive at a crossroads with the A60, and join the A60 north. The A60 runs past the stadium. Turn right just after the bridge over the river Trent.

Coming from the M1 north, take exit 24 and make your way to the city centre and subsequently the A60. Follow the A60 south and turn left onto Cattle Market Road, a few hundred metres after having crossed the bridge over the railroad tracks.