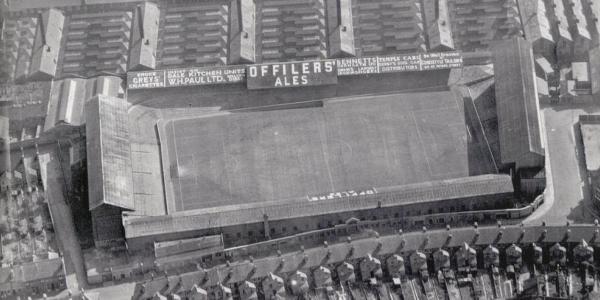 The Baseball Ground was built in 1890 by local industrialist Sir Francis Ley, who had destined it for a newly formed baseball team after he had become inspired by the sport during a trip to the USA.

Baseball struggled to become popular though, and in 1895 Derby County reached a deal with Ley to become the permanent tenant of the ground. Ley in turn invested £7,000 to raise capacity from 4,000 to 20,000 places.

Derby played its first match at the ground as a full tenant on the 14th of September 1895. An approximate 10,000 spectators saw them beat Sunderland 2-0.

By the early 1920s Derby made plans to move again, but instead decided to buy the freehold on the stadium from Francis Ley and become the owner of the Baseball Ground.

Soon after, in 1926, Derby promoted to the First Division and seized the opportunity to build a new main stand designed by Archibald Leitch. After the stand had been completed, attention turned to the opposite side (Popular Side) where the terrace got enlarged and fitted with cover.

No changes were made in the following decades until in 1969 the club once again took advantage of promotion to the First Division. The Popular Side got extensive redeveloped and renamed Ley Stand in honour of Sir Francis Ley.

The redevelopment had increased capacity to just over 40,000, and the Baseball Ground was one of the few English stadiums with seating as well as standing areas on all sides. Soon after, in 1969, it recorded its highest attendance when 41,826 people visited a home match against Tottenham Hotspur.

From the mid-1970s Derby’s sportive successes and finances slowly deteriorated and the only changes made to the stadium were measures to keep the increasing number of hooligans at bay.

In the early 1990s the Baseball Ground got converted into an all-seater following the publication of the Taylor Report. This brought capacity down to 18,300 seats.

The ground was far from suited for being an all-seater though, which led to many discomforts. Plans were therefore made to rebuilt three of the four stands only leaving the Ley Stand intact.

While this scenario meant that the club could remain at its cherished home, it would still rob the Baseball Ground of most of its character and it would not offer a solution for the access difficulties.

Plans therefore changed and in February 1996 the club announced it had acquired land to build a new stadium. Construction of Pride Park Stadium commenced later in 1996 and was completed in the summer of 1997.

Derby played its last match at the Baseball Ground on the 11th of May 1997. The home side lost the match 1-3 from Arsenal.

In the next few seasons the ground kept being used for reserve matches, but was then sold to property developers. It got finally demolished in 2003 and replaced by residential housing. In 2010 a commemorative statue of three football players was revealed at the place where once stood the Baseball Ground.