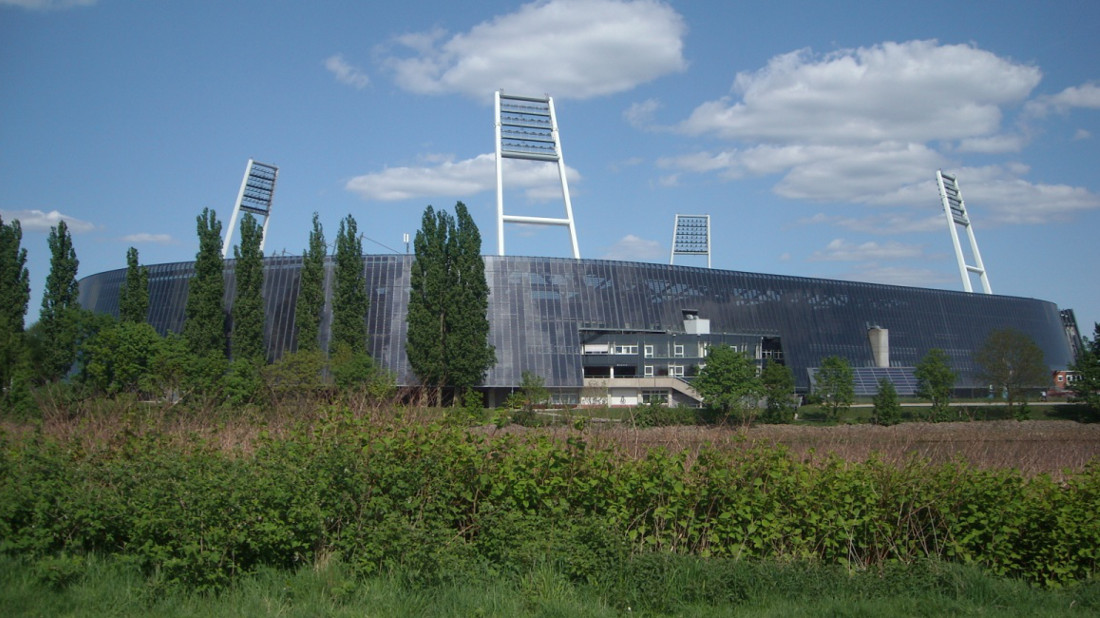 Weserstadion was built in 1909 as a general sports field. It had one wooden stand and was initially only sporadically used for football matches.

The first big stand was built in 1926, and in 1930 Werder Bremen moved in to play their home matches at the ground.

In 1935, Weserstadion was taken over by the city of Bremen and was in the following years primarily used for political purposes of the ruling NSDAP Nazi Party. During the Second World War anti-aircraft guns were stationed at the stadium.

Weserstadion underwent various developments in the mid-1960s, which included cover for the North Stand and an extra tier for both curves. The main stand (South Stand) received a new roof in 1973, and the opposite North Stand got completely rebuilt in 1978.

Building works continued in the late 1980s, when first the western curve and than the South Stand got rebuilt in the style of the North Stand. Both stands were ready in 1992, and a few years later the reconstruction of the eastern curve completed the stadium.

Weserstadion applied to be a playing venue during the 2006 World Cup, however saw its application rejected.

In 2008, Werder started a new round of redevelopment works in order to modernise the stadium. The pitch was dug out and the stands got extended closer to the pitch, both curves got rebuilt in a rectangular shape, corporate facilities were improved, and a new roof covered with solar panels was installed. Works were completed in the summer of 2011.

The club had initially planned to add a third tier to the stadium, but this was abandoned due to rising costs.

(photos of the present Weserstadion below)

How to get to Weserstadion

Weserstadion stands on the banks of the river Weser in a residential area surrounded by parks and other sports facilities. It is located about 2 kilometres east from Bremen’s historic city centre and about 2.5 kilometres from the main railway station.

Alternatively, you can also reach the stadium by tram (Straßenbahn). Take tram 3 toward Weserwehr from the Domsheide in the city centre and get off after about 7 minutes at stop Weserstadion.

From the main railway station you can take tram 10. Take the tram in the direction of the Sebaldsbrück and get off at stop St-Jürgen-Straße (10-minute journey). It is a 10-minute walk to the stadium from there, or change to tram 3 to get one stop closer.

On matchdays the area around the stadium is closed off for cars. The club offers various shuttle services from designated parking areas. Signs are posted from the access roads.

There is also a shuttle service by boat that runs from various points along the river Weser.

Werder typically sell out about half of all home matches per season, but for most matches tickets will be easily available if bought in advance.

Werder have divided their home matches into three pricing categories. Tickets for a category C match, the cheapest, range in price from €20.00 for a lower-tier seat behind the goal to €50.00 for a central seat at one of the long sides. Standing costs €15.00.

You can find a stadium map here, or email tickets@werder.de for more information.

Werder Bremen offer guided stadium tours that include the away dressing room, the press conference room and VIP areas, and are concluded with the Werder museum (WUSEUM). The tour lasts 60 to 90 minutes and a further 15 to 45 minutes can be spent at the museum.