No matches were played in Ligue 1 last Saturday. Instead the league commemorated the 20th anniversary of the Furiani stadium disaster which took the lives of 18 fans and injured hundreds more.

The lead up to the disaster starts on the 22nd of April 1992. SC Bastia, from the football-mad town of Bastia on the island Corsica, has just beaten Nancy on penalties and has progressed to the semi-finals of the Coupe de France. In this semi-final it will meet Olympique de Marseille, the absolute top team in France of those years, hosting such players as Jean-Pierre Papin, Chris Waddle, Abedi Pelé, and Didier Deschamps.

The semi-final will take place in Bastia’s Stade Armand Cesari, more commonly referred to as Furiani. The stadium’s capacity of about 8,750 is usually more than sufficient for the average Ligue 2 match of the club, but a semi-final match against Marseille is of a different category.

The club had already used emergency stands for the quarter-final against Nancy, but the directors now aim for bigger measures. They decide that the small North Stand, built in 1948 and only being able to hold 750 fans, needs to get demolished and replaced by a temporary structure that can seat 9,300 fans. The resulting capacity of almost 18,000 would more than double the original one. 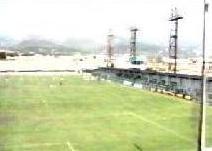 There is little time though, as the semi-final is already played two weeks later. And there is definitely no time to apply for the required planning permission for the demolition of the stand. Therefore, on the evening of the 24th of April, the company of ex-club-president Vendasi is contracted for the demolition of the stand, and in the midst of the night the stand is secretly demolished.

State representative Hurand only finds out the next day through the local press, but it is too late to stop the developments.

In the meantime, Bastia has contracted the firm Sud Tribune for the installation of the new stand. Another firm, Space Locations, had intitially also been contracted by the club, however pulls out stating a lack of time.

Works on the new stand start on Tuesday the 28th, however at the same day a strike breaks out at the port of Marseille which prevents the delivery of the necessary materials. French Football Federation (FFF) refuses to postpone the match, but Sud Tribune assures that they will be able to get the materials on the island itself.

Bastia is eager to start the ticket sales for the extra stand, however these cannot be sold yet as the FFF first requires a positive safety report. This safety reports follows on Wednesday, however, as was pointed out after the disaster, fails to include the confirmation of the official safety commission. Ticket sales can start though, but the Corsicans soon find themselves stunned by the prices that have been increased by 75% in comparison with the quarter-final.

A day later, the safety commission then finally gives its stamp of approval, and despite the initial delays works seem to progress steadily over the weekend. However, on Monday (one day before the match) bad news arrives as the fire department has encountered anomalies and considers the safety of the stand to be insufficient. Frantic last-minute works are executed until a few hours before kickoff.

On the day of the match Bastia is gripped by football fever. As early as four hours before kickoff the first fans are heading toward the stadium located just south outside of the city, meanwhile waving their flags and working their car horns.

Ninety minutes before kickoff the stadium is already packed and the atmosphere is thrilling. However, those seated at the temporary North Stand are starting to voice their concerns, comparing the stand to a rocking boat. The tension is palpable and some refuse to move up the stand. Others call for postponing the match, however no decision is taken.

Some pre-match images in the next video. The stand in question is the long one with the floodlights in the middle.

By 8:00 pm, when the players enter the pitch to warm up under a rapturous applause, people have started to seriously frighten and some panic. In the meantime engineers are tightening bolts and repairing defects at the base of the stand.

Fifteen minutes before the match, after the players have gone back to the dressing rooms, the stand has become increasingly unstable. The stadium speaker asks the spectators not to move too much so that no further metal parts come off.

Five minutes later, at 10 minutes before kickoff, the upper part of the stand collapses and brings down 2,000 fans and journalists. The back of the stand has turned into a gigantic mass of metal tubes, seats, and bodies. The spectators left at the bottom part that still stands try to escape to the pitch, being helped by the players that had just entered the pitch.

The pitch is next turned into a massive open-air hospital, and an hour later the first rescue helicopters arrive. As the local hospitals are soon saturated, many wounded are airlifted to hospitals in Nice and Marseille. 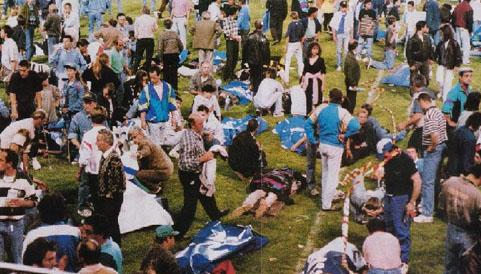 While in the following days the death count slowly moves up, the first accounts of malpractice, incompetence, denial and blame soon follow. With always the central question: “How could anyone have let this semi-final go ahead?”

An official report soon looks into the responsibility question. It concludes that several engineering errors, a lack of planning and oversight, the too-short time schedule, breaches of safety procedures, and general poor safety management and control (by the club, the Corsican football league and FFF) all contributed to the disaster.

On top of this, it finds that the increased ticket prices had not been reported to the FFF and the additional revenue had therefore been destined to go into the private pockets of the Bastia directors.

Other notable findings included that the safety committee had never officially given its approval after the fire department had initially given a negative advice, and that Bastia directors had never deemed it necessary to ask for planning permission, them being more powerful than the mayor of the town.

A subsequent trial led to the conviction of eight of the responsible with prison terms ranging up to two years. Bastia president Filippi could not get convicted as he was shot dead in his backyard two days before the start of the trial.

Last week, Bastia fittingly commemorated the 20th anniversary of the disaster with promotion to Ligue 1. After the several services that were held last weekend, Bastia will this week play a commemorative match against a youth team. This will be followed by a pre-season friendly against Liverpool, a club who has also been marked by a stadium disaster.

For more photos go to this l’Equipe slideshow. For more information try this excellent resource (in French).