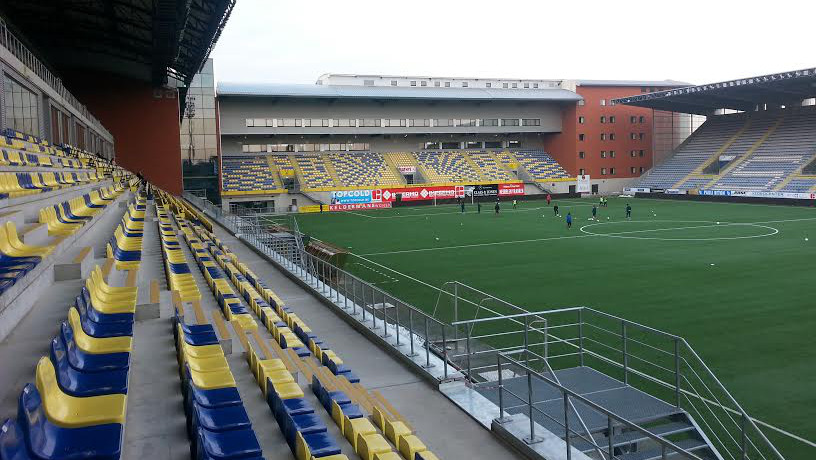 Stayen, until 2009 written as Staaien, was built in 1923 on the grounds of a sugar mill. STVV, which had been founded four years earlier, had played at various sites in the first few years of their existence before settling at Stayen.

Stayen remained unchanged for the next decades until in the 1980s and early 1990s further improvements were made, including a new stand. However, by that time, the stadium had significantly aged and plans were made for a larger redevelopment.

First, in 2003, the terrace opposite the main stand got replaced by a new all-seater stand. Next, in 2009, a new stand got built behind the goal, followed by a new main stand, which got completed in 2014.

How to get to Stayen

Stayen is located on the western edge of the town of Sint-Truiden at roughly a kilometre from Sint-Truiden’s rail station and its town centre.

The walk from the station or town centre takes only 15 minutes.

Frequent direct trains connect Sint-Truiden with Brussels and Ghent. Trains run at least once an hour for the 60-minute (Brussels) or 90-minute (Ghent) journey. From Antwerp or Liege a change is required.

Tickets for STVV matches can be bought online or at the club office at Stayen.

Tickets are also available at the ticket booths of the stadium from 1.5 hours before the start of the match. Sint-Truiden doesn’t normally sell out save for the occasional high-profile match.