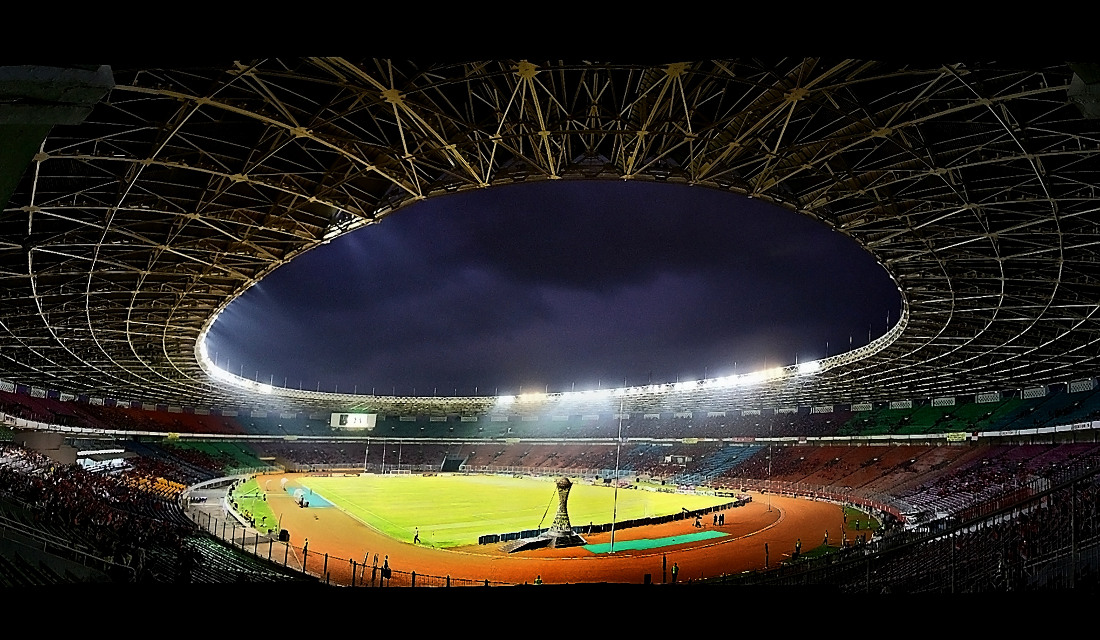 Stadion Utama Gelora Bung Karno, often abbreviated to SUGBK or simply GBK, got built between 1958 and 1962 for the 1962 Asian Games.

The stadium got named after Indonesia’s first president Soekarno, and could initially hold about 110,000 spectators. Its construction was financed by loans from the former Soviet Union. Between 1969 and 2001, during the regime of president Soeharto, the stadium was called Stadion Utama Senayan to remove references to his ousted predecessor.

In 1985, up to 150,000 spectators were said to have attended the Championship final match between PSMS and Persib, spilling out on the ahtletics track, far surpassing the official capacity.

In 2007, capacity got reduced to 88,000 seats following a refurbishment for the 2007 AFC Asian Cup. During the Championships, SUGBK hosted five first round group matches, a quarter-final, and the final between Iraq and Saudi Arabia (1-0).

In 2016, Stadion Utama Gelora Bung Karno closed for an extensive refurbishment in preparation for the 2018 Asian Games that will be held in Indonesia. Works included the replacement of benches by single seats, and an upgrade of facilities. This reduced capacity to 76,000 seats. The stadium reopened in January 2018.

How to get to Stadion Utama Gelora Bung Karno

Stadion Utama Gelora Bung Karno is located in the middle of the Central Business District (CBD) of Jakarta. Jakarta’s CBD stretches out from central to southern Jakarta along the main drag Sudirman Avenue, whereas Jakarta’s old town lies further north.

The stadium can furthermore be reached by the TransJakarta fixed lane rapid bus system that runs along Sudirman Avenue. Buses run north to Merdeka Square and Kota Station and south to Blok M Shopping Mall. Get off at stop Gelora Bung Karno.

In the next years, a new MRT metro system will open that will connect the stadium with the north and south of the city along a similar route as the TransJakarta buses.

Stadion Utama Gelora Bung Karno is located in a park in the middle of Jakarta’s CBD, which means there are plenty of places to eat and drink around, mostly south and east of the stadium. There are furthermore various shopping malls close to the stadium, such as Pacific Place and Senayan City Mall, which have multiple bars and restaurants inside.

The are many hotels close to the stadium, but since it is located in a business district most are in the higher price end. Some of the hotels directly bordering the park are the Sultan Hotel Jakarta, Century Park Hotel, and Fairmont Jakarta, and, if you’ve got more money to spare, the Ritz-Carlton Pacific Place is just across the road.

Click here for an overview of hotels near Stadion Utama Gelora Bung Karno and here for hotels elsewhere in Jakarta.