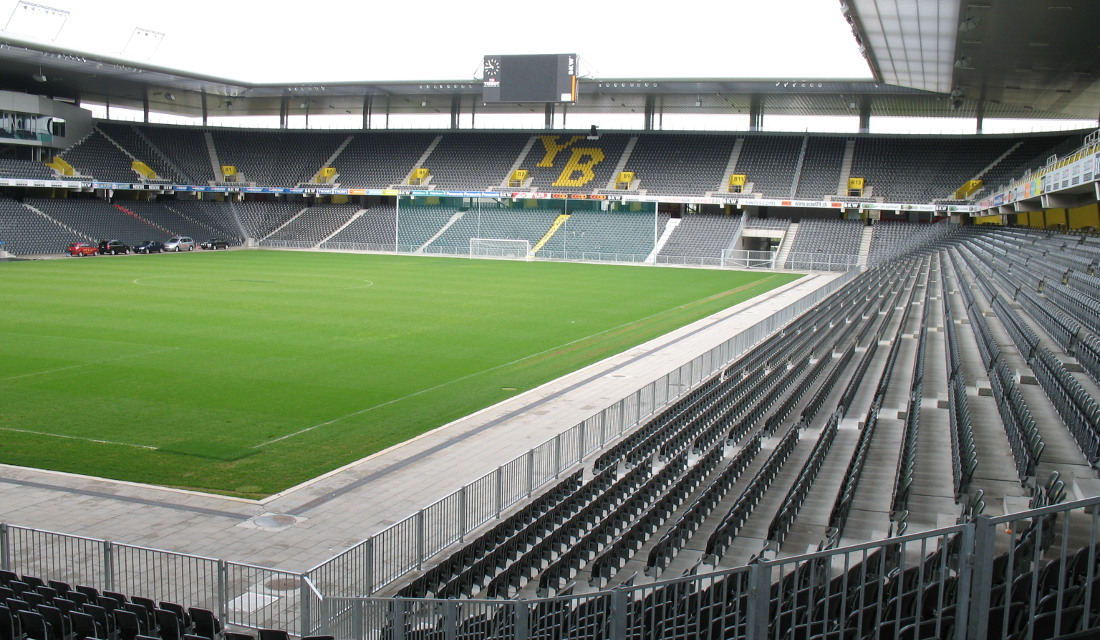 Stade de Suisse was built at the site of Bern’s famous Wankdorfstadion. The old stadium got demolished in 2001, after which was started with the construction of the new one.

The stadium was one of the playing venues of the Euro 2008 championships, during which it hosted three group matches.

Stade de Suisse has had an artificial pitch since 2006, though it was replaced with a natural one for the European Championships.

How to get to Stade de Suisse

Stade de Suisse is located in the north of Bern, about 2.5 kilometres from the city centre and main railway station.

The stadium can be reached by taking exit Wankdorf from either the A1 or A6. From there follow the signs to the stadium.

There are various ways to get to the stadium by public transport. From the main railway station you can take tram 9 in the direction of Guisanplatz, which is also where you get off.

Finally, you can also take bus 20 to Wankdorf Bahnhof.

Stade de Suisse is located in a rather quiet residential area with few bars and restaurants around. It is therefore likely a better idea to eat and drink in Bern’s city centre.

There are a few hotels in the area around Stade de Suisse. Novotel Bern Expo and Hotel Restaurant Jardin are closest, get good reviews, but also come in the higher price categories. Hotel Alpenblick and Hotel Waldhorn are alternatives that are a little cheaper, but also somewhat further away. Hotel Pension Marthahaus seems one of the best deals in the area and is also at walking distance.

For all hotels near Stade de Suisse click here. Alternatively, there is a good variety of hotels in different price categories in Bern’s city centre.

Tickets for Young Boys matches can be bought online (or through Ticketcorner), by phone +41 (31) 344 88 88, or at the Fan Shop at the stadium, at the Collect Lounge at the Welle7 shopping centre near Bern’s main railway station, or at any of the Ticketcorner sales outlets.

Tickets are also available at the ticket windows of the stadium from 90 minutes before the start of the match. Young Boys’ attendances are among the highest in the league, and while it doesn’t often sell out a match, booking in advance is recommended for the Basel home match.