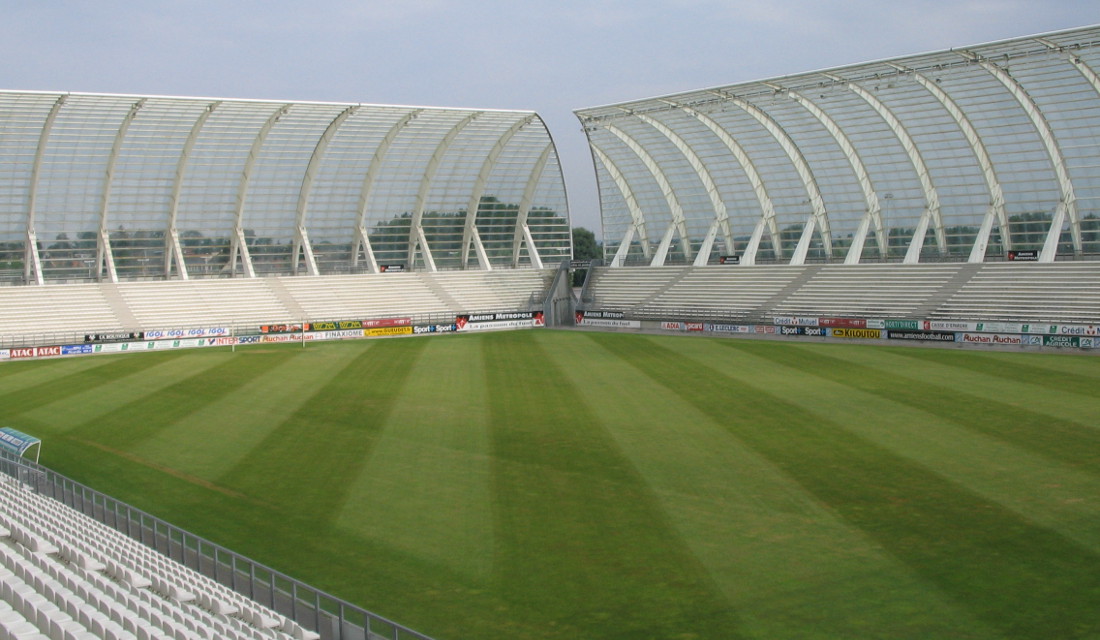 Stade de la Licorne officially opened on 24 July 1999 with the French Super Cup match between Nantes and Bordeaux (1-0), though Johnny Hallyday had already given an inauguration concert a few weeks earlier.

Stade de la Licorne replaced Amiens’ old Stade Moulonguet, which had fallen into a state of disrepair, and these days hosts the Amiens reserve team. It became once more the home of Amiens in 2016 when Stade de la Licorne was unavailable due to repair works on the glass roof.

The capacity of the stadium could easily be expanded to 20,000 seats if Amiens were to achieve promotion to Ligue 1.

Lens made the stadium their home during the 2014-15 season while their Stade Bollaert Delelis got redeveloped for the Euros 2016.

How to get to Stade de la Licorne

Stade de la Licorne is located in the west of the city of Amiens at roughly 3 kilometres from the historic centre and half a kilometre more from the main railway station.

It takes just over half an hour to walk from Amiens’ city centre to the stadium. Alternatively, you can catch bus B7. Take the bus from the main railway station or Place Hotel de Ville in the city centre in the direction of Saleux. Get off at stop Megacite. Buses tend to run twice an hour.

There is a reasonably frequent train service from Paris Nord station to Amiens. Trains depart roughly once an hour to once every other hour depending on the time of the day. The journey takes 70 to 80 minutes.

Tickets for Amiens games can be bought online or at the club store at the stadium.

Tickets can also be bought at the ticket windows of the stadium before the start of the match. Amiens doesn’t generally sell out.