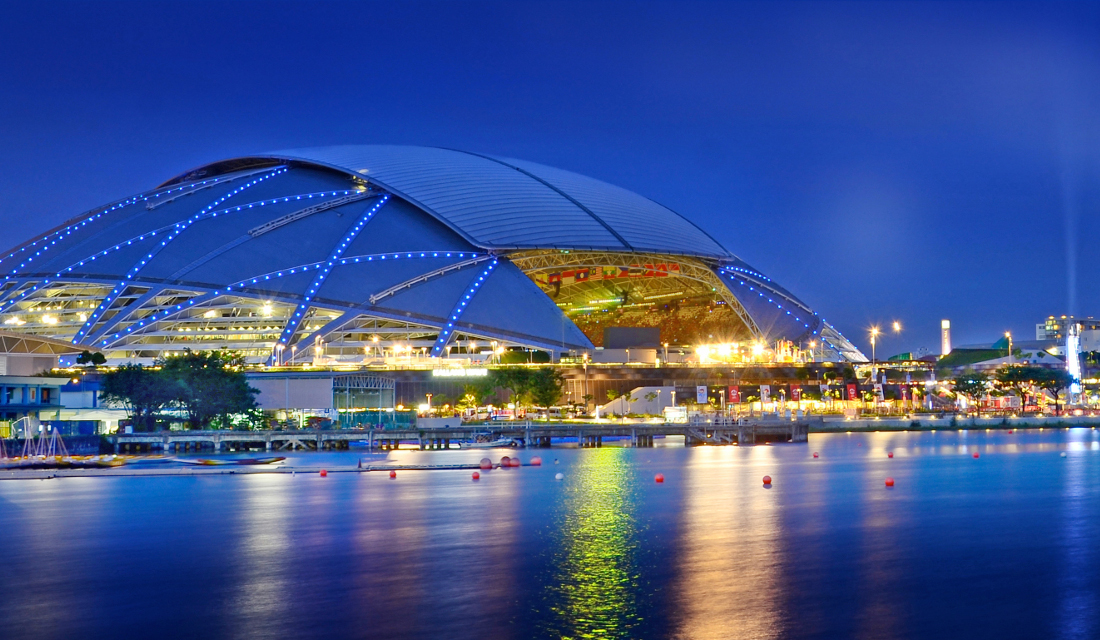 Singapore National Stadium, also referred to as Kallang National Stadium, got built to provide Singapore with a world class sports and concert venue. It replaced the old national stadium that had stood at the same site but did not meet modern standards.

The old stadium closed in 2007 and got demolished in 2010, following which works on the new stadium started. In the meantime, the floating stadium The Float at Marina Bay was used as a temporary replacement ground, though the Singapore national team played at Jalan Besar Stadium.

Singapore National Stadium officially opened on 30 June 2014. It hosted its first football match in August of that year: a friendly between Juventus and a Singapore selection.

The stadium has a retractable roof and retractable stands, making it suitable to host football and rugby games as well as cricket matches and concerts. The roof, spanning 310 metres, is the world’s largest free-span dome.

How to get to Singapore National Stadium

Singapore National Stadium is located in the Kallang area in central Singapore just north-east of downtown Singapore. The stadium lies about 3 kilometres away from the central business district (CBD) and the iconic Marina Bay Sands hotel.

The stadium is easily reached by Singapore’s MTR metro network. Station Stadium lies right next to the stadium and is on the Circle Line that connects with the downtown area around the Marina Bay Sands hotel and northern parts of downtown area towards Orchard Road. Station Kallang is an alternative a 10-minute walk away from the stadium that is on the East West Line that runs right through the CBD and Chinatown.

Singapore National Stadium is part of a complex including multiple sports facilities and a shopping mall with cinema. There are multiple bars and restaurants in the shopping mall and stadium complex to get something to eat or drink. Alternatively, there are furthermore plenty of bars and eateries along Geyland Road just north of the stadium.

There are no hotels directly near the stadium and there’s generally no need either to stay close to the stadium as public transport in is easy. If you do prefer to stay at walking distance of the stadium, there are a good few hotels along Geyland Road, but these tend to be rather basic affairs with mixed reviews.

Click here for an overview of hotels near Singapore National Stadium.