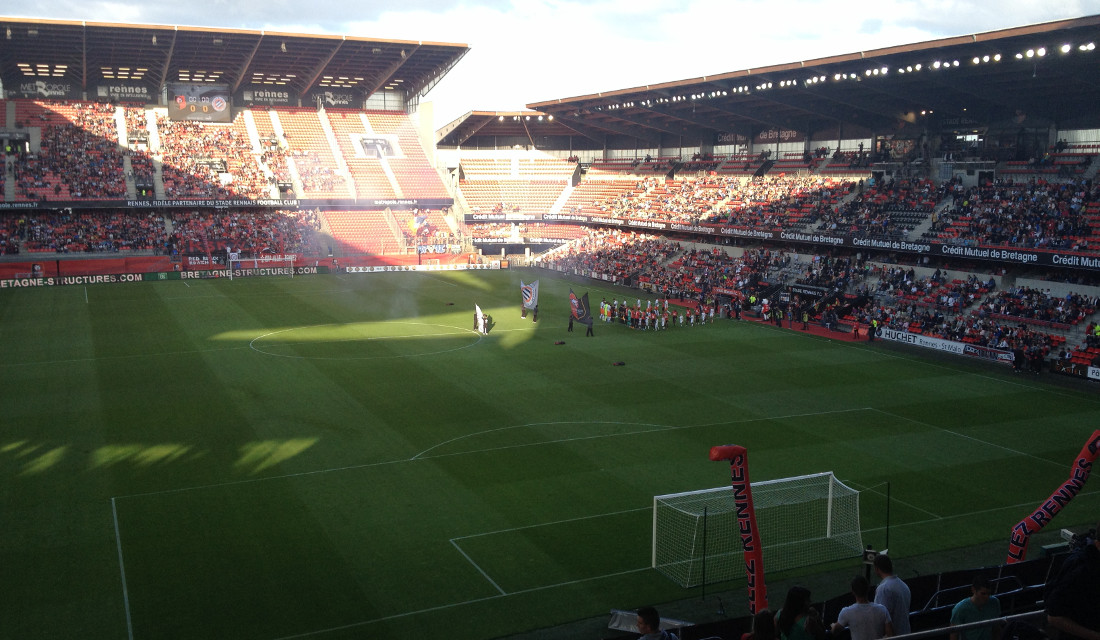 Roazhon Park, better known as Stade de la Route de Lorient, officially opened on 15 October 1912 with a match between Rennes and Racing Club de France (0-4). Stade Rennais had moved to the new ground after their previous ground on the south bank of the river Vilaine had flooded several times.

In the next two decades, few changes were made until the stadium got extensively renovated in the late 1930s. After the war, in the 1950s, Stade de la Route de Lorient underwent a next series of redevelopments, resulting in a capacity of just under 30,000.

Due to the club’s declining successes from the mid 1970s and the resulting decrease in attendances, few changes were made to the stadium in that period, though the club kept making plans to rebuild the stadium into a modern 30,000-arena.

In 1987, Rennes finally started executing these plans with the construction of a new stand that was inspired by Munich’s Olympiastadion, however the project got abandoned after one stand when the club relegated to the second division.

After Rennes’ fortunes had returned in the mid 1990s, the club again presented plans for a complete redevelopment of the stadium, and after the city council voted in favour of the €37-million project, works commenced in 1999.

Over a five-year period all stands were either rebuilt or renovated. Stade de la Route de Lorient officially reopened on 18 August 2004 with a friendly match between the national teams of France and Bosnia.

The stadium changed name in 2015 to Roazhon Park following a naming rights sponsorship deal. Around the same time, the stadium underwent a small refurbishment including a change of seat colours from green and blue to red.

How to get to Roazhon Park

The stadium lies almost adjacent to the city’s ring road. From the western side of the ring road, take exit 10 Port de Lorient, and turn towards the city. The stadium is situated on the right side of the road.

Bus 11 connects the stadium with the city centre (Place de la République) and main railway station. Take the bus in the direction of Z.I. Ouest, and get off at stop Stade Rennais. Buses generally run at least every 15 minutes. The ride from Repúblique takes about 10 minutes, from the station (Gares) a few minutes more.

Bus 30 connects Roazhon Park with the northern parts of the city.

Tickets for Stade Rennais matches can be bought online, at the Fanshop (Boutique Officielle) at Roazhon Park, or through the Francenet and Ticketnet sales outlets.

Tickets can also be purchased at the ticket booths at the stadium on the day of the match from 1.5 hours before kickoff. Rennes only sell out the occasional high-profile match.

Ticket prices depend on the opponent. For a regular match they typically range from €9.00 for a lower-tier seat behind the goal to €38.00 for a central seat at the main stand. For high-profile matches prices are increased to between €13.00 and €58.00.