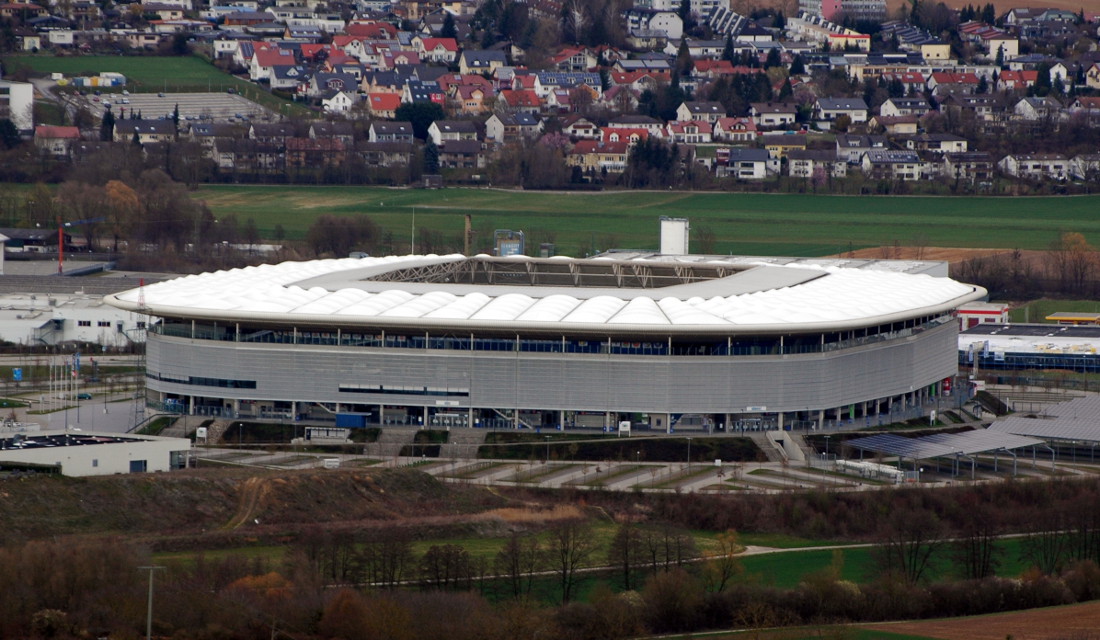 The PreZero Arena, previously known as Rhein-Neckar-Arena, got built between May 2007 and January 2009. It replaced Hoffenheim’s old Dietmar-Hopp-Stadion, which did not have the necessary facilities for Bundesliga football.

The Rhein-Neckar-Arena officially opened on 24 January 2009 with a friendly match between 1899 Hoffenheim and a selection of players from the Rhein-Neckar region.

How to get to the PreZero Arena

The PreZero Arena is located in Sinsheim, a town located about 6 kilometres from Hoffenheim.

The stadium lies slightly more than 2 kilometres away from Sinsheim’s small historic town centre and the town’s main rail station. The walk should take less than half an hour.

Sinsheim’s second station, Sinsheim Museum/Arena, lies a 15-minute walk away from the stadium.

Both stations are served with direct regional trains from Heidelberg and, less frequently, Mannheim and Heilbronn. The journey from Heidelberg takes about half an hour. From there trains run to other parts of Germany.

On matchdays there are extra trains and shuttles run from both stations to the stadium.

The stadium lies right next to the A6 motorway. If arriving by car, take exit 33b Sinsheim-Süd.

Eat, drink, and sleep near the PreZero Arena

The PreZero Arena is located on an office park next to a motorway on the southern edge of the town of Sinsheim. While you may find some roadside fastfood near the arena, the area is little appealing so get your food and drinks in Sinsheim’s small town centre.

If you wish to stay in a hotel close to the PreZero Arena, then Hotel Sinsheim is an excellent choice. It’s a short walk away from the arena. Alternatively, there are a few more hotels to choose from in Sinsheim. Many will travel in for the day though and stay in one of the nearby cities like Frankfurt or Stuttgart, or one of the picturesque nearby towns like Heidelberg.

Tickets for 1899 Hoffenheim games can be purchased online, or at the Ticket-Shop at the stadium.

Hoffenheim’s attendances have been slowly dropping in recent seasons and save for a few high-profile matches tickets are generally easily available if bought in advance.

Hoffenheim have divided their home matches in three pricing categories, though the majority of matches fall into the cheapest category. These regular tickets range in prices from €22.00 for some sections behind the goal to €44.00 for a seat at the side opposite the main stand. Standing costs €14.00.

Prices are higher for a number of high-profile matches and even more for the match against Bayern.

You can find a seating map here.

Hoffenheim offer guided stadium tours around the Rhein-Neckar-Arena that last about 60 minutes.

The tour costs €5.00. Check here for the latest schedule and bookings.

Photos of the PreZero Arena