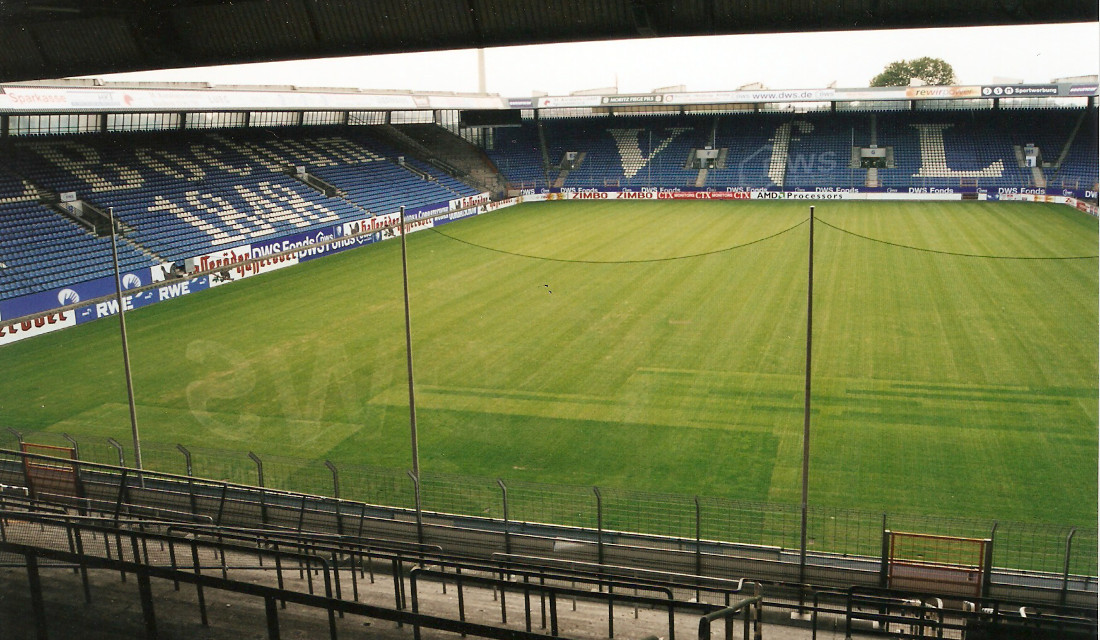 The roots of Vonovia Ruhrstadion, previously called simply Ruhrstadion and rewirpowerStadion for sponsor reasons, go back to October 1911 when a first sports field was opened at the site of the current stadium.

The Ruhrstadion first got significantly expanded right after the First World War, following which it could hold about 50,000 spectators. It was at that moment one of the largest and most modern stadiums of Germany.

In the 1950s, a new main stand got built, but overall few changes were made until the mid-1970s. By then several new and more modern stadiums had been built in Germany and with only 2,700 seats the Ruhrstadion lacked the proper facilities for Bundesliga football.

Bochum therefore embarked on a major redevelopment program, which meant that between 1976 and 1979 one by one all of the stadium’s stands got rebuilt. For a while Bochum was even forced to play its home matches at Dortmund’s Westfalenstadion.

The Ruhrstadion reopened on the 21 July 1979 with a match against SG Wattenscheid 09. The capacity of the stadium was 49,522 places at that time.

Since then only minor renovations have been performed on the stadium, among which the conversion of part of the standing areas into seating. In 2006 the stadium changed its name to rewirpowerStadion as part of a sponsorship deal, which got changed to Vonovia Ruhrstadion in 2016 following a new deal.

(photos of the present rewirpowerStadion below)

How to get to Vonovia Ruhrstadion

Vonovia Ruhrstadion is located toward the north-east of the city of Bochum, only slightly more than a kilometre away from Bochum’s city centre and a little less than two kilometres from Bochum’s main railway station.

Following the Castroper Straße north by foot will get you from the centre to the stadium in 15 to 20 minutes.

Alternatively, you can take light-rail (U-Bahn) line 308 or 318 from the main railway station (Bochum Hbf). Get a train in the direction of Schürbank Straße and get off at stop rewirpowerStadion. The ride only takes a few minutes.

Vonovia Ruhrstadion lies just south of the A40 motorway, which runs north of the city and connects with the A36 further east. If arriving by car, take exit Stadion.

Tickets for VFL Bochum games can be bought online, by phone +49 18 05 95 18 48, at the Fanshop at the stadium, or at one of the other sales points, which include the Tourist Centre at the Huestraße 9 in Bochum’s city centre.

Matchday tickets are also sold on the gate of the stadium until the start of the match. Bochum very rarely sell out in the 2. Bundesliga.

Bochum organise guided stadium tours that include the VIP areas, media room, and dressing rooms. The tours last about 60 minutes.

Tours run occasionally, check the official website for the current schedule. Tickets can be bought at the VFL Bochum Fanshop at the stadium and cost €5.00.