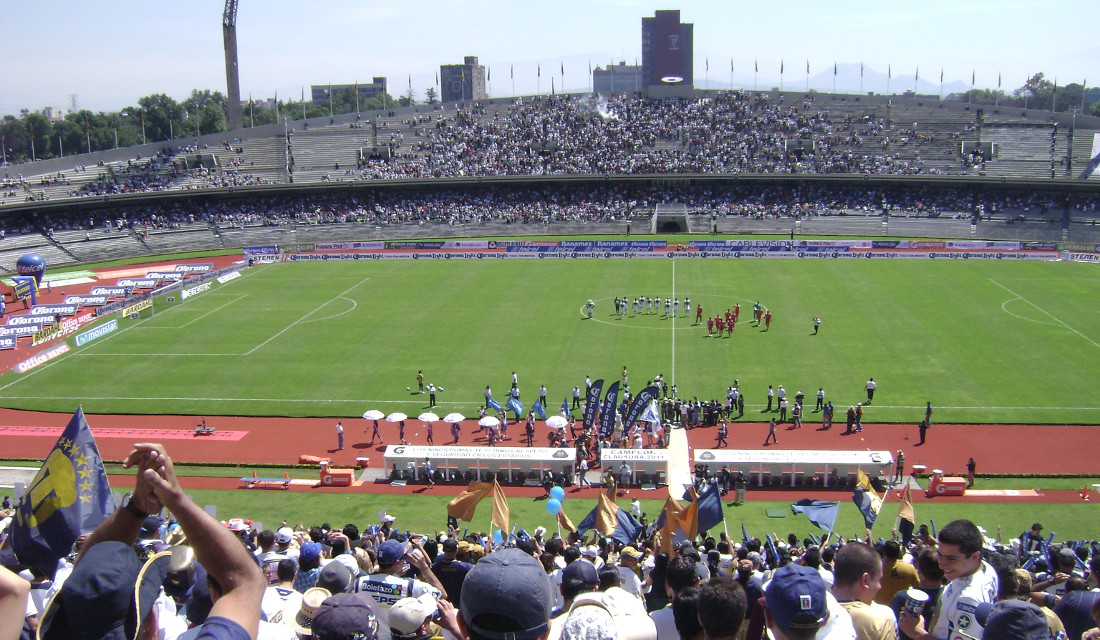 Estadio Olimpico Universitario was the centrepiece of the 1968 Olympics, hosting the opening and closing ceremonies, and the athletic events.

The stadium was one of the playing venues of the 1986 World Cup. It hosted three group match and the round of 16 match between Italy and France (0-2). It could host about 68,000 spectators at that time.

Over the years, capacity of the stadium got gradually reduced due to safety measures and refurbishments, first to around 63,000 during most of the 2000s and more recently to 52,000 seats.

Estadio Olimpico Universitario is part of a complex of UNAM university buildings that has been given World Heritage status.

How to get to Estadio Olimpico Universitario

Estadio Olímpico Universitario is located in the south-west of Mexico City, approximately 14 kilometres from its historic centre. It is part of the main campus of the UNAM university, Mexico’s largest university.

The stadium can be reached by car following the Avenida Insurgentes Sur, one of the city’s principal avenues. Follow the avenue south until the stadium appears on the right.

If using public transport, you can reach the stadium by either metrobus or metro, with the former the most convenient option.

The metrobus is the city’s fixed-lane bright red bus system. Line 1 runs all the way down Avenida Insurgentes and can be boarded around Avenida Reforma, or at several stops in the Zona Rosa and Condesa areas. Take the bus in southern direction and get off at stop Dr. Galvez. From there it is a 5 to 10-minute walk slightly uphill following Insurgentes.

Alternatively, you can take metro line 3 to station Copilco, find your way to the UNAM university campus, and cross the campus to the stadium. The walk will take about 25 minutes.

Tickets for Pumas matches can be bought online via Ticketmaster, or through one of the Ticketmaster sales outlets.

Tickets are also available on the gate on the day of the match. Pumas very rarely sell out.

Prices depend on the opponent, but will typically range from MXN 140.00 for a seat behind the goal to MXN 230.00 for the lower parts of the long sides. Prices increase to between MXN 180.00 and MXN 290.00 for high-profile matches.