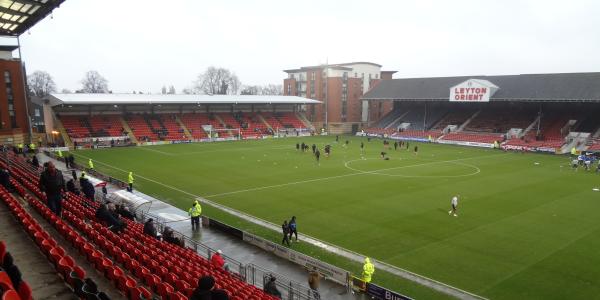 The Matchroom Stadium, commonly referred to as Brisbane Road, became the home of Leyton Orient in 1937. The site had earlier been used by amateur club Leyton FC, whereas Leyton Orient had played at a stadium on Lea Bridge Road.

Brisbane Road initially consisted of one small seater stand and cinder banking on the three other sides. In 1956, the club bought a new main stand from the Mitcham Stadium.

In the following decades, the terraces got gradually improved and expanded, and the western terrace received cover.

In 1978, the terrace of the West Stand got converted into seating, but few changes were made until the late 1990s when a new South Stand was built.

To finance the developments, part of the surrounding land was sold to property developers, resulting in four apartment blocks in each corner of the stadium.

(Photos of the present The Matchroom Stadium below)

The Matchroom Stadium is located in the Leyton area in the north-east of London, approximately 5 miles from the City of London.

The stadium is easily reached by metro as Leyton tube station is only a 5 to 10-minute walk away. Leyton is on the Central Line, which crosses right through central London.

London Overground station Leyton Midland Road is also at walking distance, though a little further away. Trains connect the station with stops mostly in the north of London, though two stops further west, at Blackhorse Road, one can also transfer to the Victoria Line.

The area around The Matchroom Stadium is mainly residential, though there are a few pubs and places to eat on nearby Leyton High Road. The area is one of the typical London multi-ethnic neighbourhoods with resulting food choices.

Alternatively, the regenerated centre of Stratford and adjacent Westfield Shopping Centre are only 1.5 mile south of the stadium, or one tube stop away, and offer plenty of eating and drinking options. Needless to say that you can also drink in central London and catch the tube to the match.

If you wish to stay as close as possible to The Matchroom Stadium, then the Stratford area is probably the best option. There are various hotels in the budget and mid-range category in the area, and it will also be easy to reach central London from there.

Click here for all hotels in the Stratford area, and here for further options in central London.

Tickets are also available at the ticket office on the day of the match. Orient rarely sell out.

Tickets for the stands behind the goals cost £23.00, whereas those for the West and East Stand cost £25.00. Tickets are £2.00 cheaper if bought in advance.