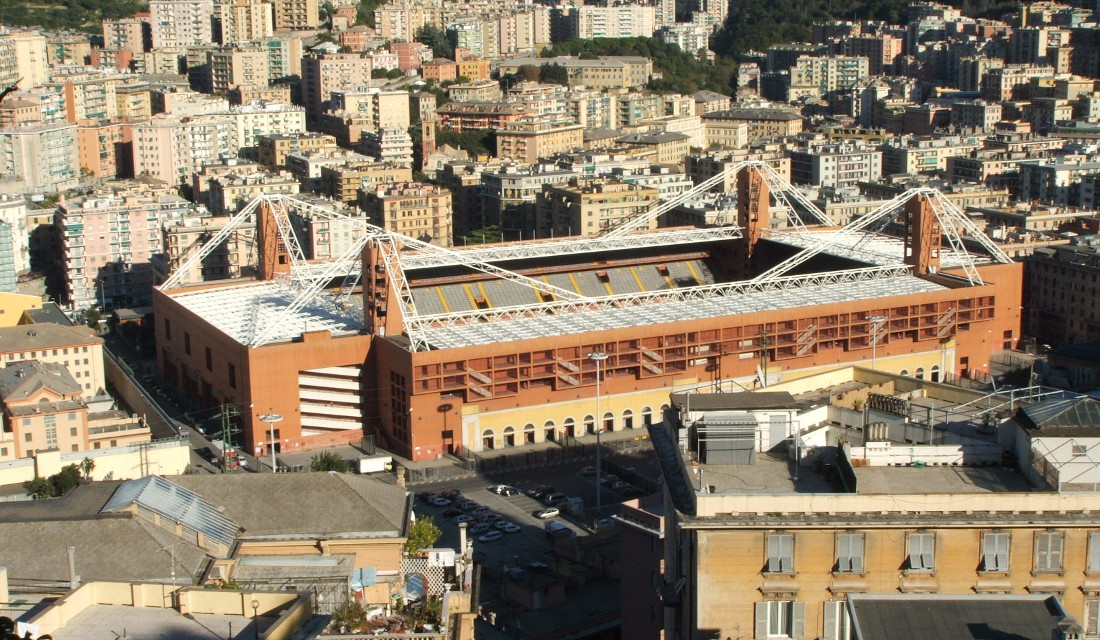 Stadio Luigi Ferraris got built in 1910 after Genoa socio Musso Piantelli came up with the idea to use the ground inside a racecourse for a football pitch. His proposal got accepted and the new stadium opened on the 22nd of January 1911.

The stadium originally only consisted of one wooden stand, but it quickly got expanded in the 1920s and 1930s to a capacity of about 30,000 places.

In 1933, the stadium got renamed to Stadio Luigi Ferraris, in honour of the former captain of Genoa who had died in the first World War.

One year later, the stadium hosted the round of 16 match between Spain and Brazil (3-1) at the 1934 World Cup.

Stadio Luigi Ferraris was until 1946 the sole home of Genoa, but when Sampdoria git founded in that year, it requested to share the ground, which was accepted by Genoa.

In the following decades, the stadium got gradually expanded to a maximum capacity of about 55,700 places in the 1980s.

Stadio Luigi Ferraris was almost completely rebuilt for the 1990 World Cup. Construction of the characteristic new stadium, designed by architect Vittoria Gregotti, started in 1987 and was completed in 1989. Works were performed gradually as to allow Genoa and Sampdoria to keep playing at the stadium.

During the World Cup, three group matches and the round of 16 match between the Republic of Ireland and Romania (0-0) were played at the stadium.

In the last decade, only minor renovations have been performed on the stadium, and its state has slowly deteriorated. Over the years, Genoa and Sampdoria have therefore looked into either redeveloping Stadio Luigi Ferraris, or into building a complete new stadium. Currently, however, no concrete plans exist.

(photos of the present Stadio Luigi Ferraris below)

How to get to Stadio Luigi Ferraris

Stadio Luigi Ferraris is located toward the north of the city of Genoa in the Marassi area. It lies along the Bisagno river(bed).

The stadium lies only 1.5 kilometres from Genoa’s historic city centre, but is best approached in a little roundabout way from the south (to avoid climbing up and down the hill that lies between the centre and the stadium.

From Brignole you can also take bus 480 or 482 in the direction of S. Eusebio. It is just a 7-minute ride to stop Marassi/Stadio.

Genova Principe train station, where the long-distance trains arrive, lies further away, about 3.5 kilometres from the stadium. You can take a train to Brignole from Principe station.

If arriving by car, take exit Genova Est from the A12. Follow directions to the city, and later on the signs to the stadium.

Stadio Luigi Ferraris is located in a dense urban area, which means that there is no shortage of the typical Italian bars and restaurants you find in such neighbourhood.

There are furthermore plenty of options for eating and drinking in the area around Brignole train station. Genoa’s principal nightlife areas are a little further west in the southern part of Genoa’s historic centre.

There are no hotels in the immediate surroundings of the stadium, but a good few in the area around Brignole, which gives you convenient access to the stadium and city centre. Hotel Nologo, Hotel Brignole, and Hotel Ricci are some of the more budget options, while Starhotels President and Golden Tulip Hotel Moderno Verdi are for those that have a little more to spare.

Click here for all hotels near Stadio Luigi Ferraris and Brignole train station, or here to see further options in Genoa’s historic centre.

Tickets for Genoa matches can be bought online via Listicket (print-at-home tickets), or in person at the Genoa Store at the Palazzina San Giobatta in Genoa’s city centre near San Giorgio metro station.

Tickets can also be bought at the stadium from 5 hours before the match. Make sure to bring a passport or ID-card. Genoa only occasionally sell out.

Tickets for Sampdoria matches can be purchased online via Listicket (print-at-home), or in person at the Sampdoria points at the Via Cesarea 107-109 (city centre) or Via Biancheri 25 (western Genova).

Tickets for the ends cost €15.00, whereas those for the long sides cost €60.00. Prices are increased with €5.00 if bought on the day of the match (except behind the goal tickets).