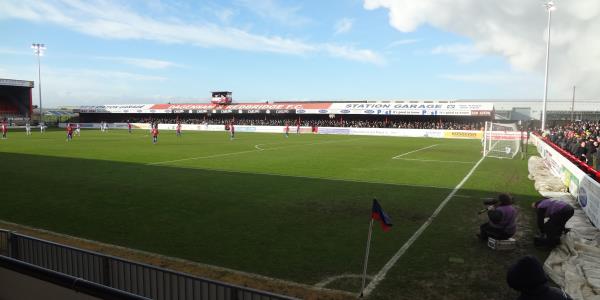 The London Borough of Barking & Dagenham Stadium, more commonly known as Victoria Road, was first used in 1917 by a local factory side. It was initially not much more than a pitch with a few bare banks and it took until 1955 when Dagenham moved in before it got significantly developed.

First, in 1955, the banks and terraces got enlarged, followed in the next year by the construction of a new Main Stand. Two years later the terrace on the other long side received cover.

Victoria Road recorded its largest attendance in 1967 when 7,200 spectators attended an FA Cup match versus Reading.

Few changes were made to the ground until the 1990s when newly formed merger club Dagenham & Redbridge embarked on a series of gradual improvements, which culminated in the construction of a new main stand in 2001.

Finally, a new modern all-seater stand got constructed at the western end of the ground in 2009. Two years earlier, Victoria Road had gotten renamed The London Borough of Barking & Dagenham Stadium following a sponsorship deal.

The London Borough of Barking & Dagenham is located in the East-London suburb of Dagenham at about 12 miles from Central London.

The stadium is easily reached by London Underground. From tube station Dagenham East, which is on the District Line, it is only 5 to 10 minutes walking to the ground. It takes just over half an hour to get to Dagenham East from Monument station in The City.

Tickets are also available on the turnstiles on the day of the match. Dagenham & Redbridge never sell out.