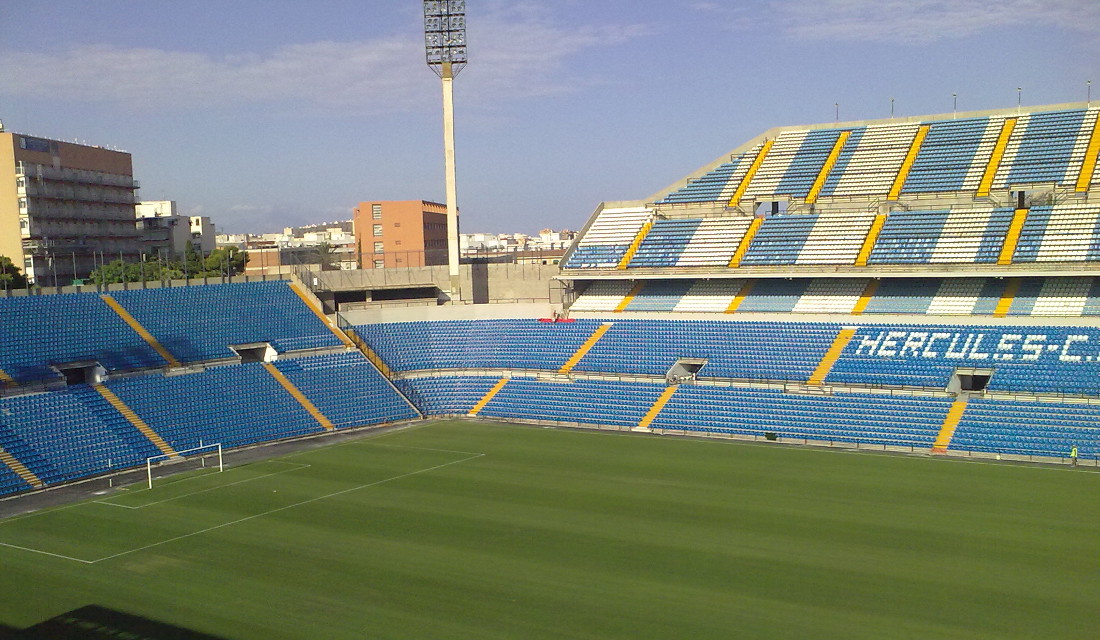 Estadio José Rico Pérez replaced Hércules’ old Campo de la Viña. It was a project of ambitious club president José Rico Pérez, who decided that the club needed to built a new stadium to match its rising successes. Due to financial difficulties, it however took until May 1973 for building works to start.

Estadio Jose Rico Perez officially opened on 4 August 1974 with a friendly between Hercules and Barcelona (0-4). The stadium had a capacity of about 30,000 at that time.

A few years later, Estadio Jose Rico Perez got selected to be a playing venue of the 1982 World Cup. As a result, the stadium got further expanded with an additional 8,000 places.

During the World Cup, it hosted two group matches and the match for third place between Poland and France (3-2).

Due to the declining fortunes of the club in the 1980s and resulting increase in debt, Hercules was forced to sell the stadium to the city of Alicante in 1993. Only in 2007 was the club able to buy the stadium back.

Estadio Jose Rico Perez received a last major refurbishment after the promotion of Hercules to La Liga in 2010.

How to get to Estadio Jose Rico Perez

Estadio José Rico Pérez is located about 1.5 kilometres north of the city centre of Alicante, just behind the Castle of San Fernando.

Alternatively, one can catch bus 8a or 11 to reach the stadium. Take line 8a from the Rambla in the direction of Parque Lo Morant. Get off at Av. Alcoi 50, from where it is a short walk slightly uphill to the stadium.

Alternatively you can take bus 11 from Plaza de los Luceros. Take the bus in the direction of Clínica Vistahermosa and get off at Av. Alcoi 52. Both buses run about once every hour.

On matchdays there is a special football service (line 192) to the stadium. Buses pass the railway station on Av. Maisonnave, continue on Av. Federico Soto, and go via Carrer de San Vicente to the stadium. Buses leave 70 and 30 minutes before kickoff from their starting point further west in the city.

Tickets for Hercules games can generally be bought on the day before the match or the day of the match at either the club office or ticket windows (taquillas) at the stadium.

Tickets can also be bought at the ticket windows of the stadium from two hours before kickoff. Hercules practically never sell out in la Segunda.

Ticket prices typically range from €15.00 for a seat behind the goal to €37.00 for a covered seat at the main stand.