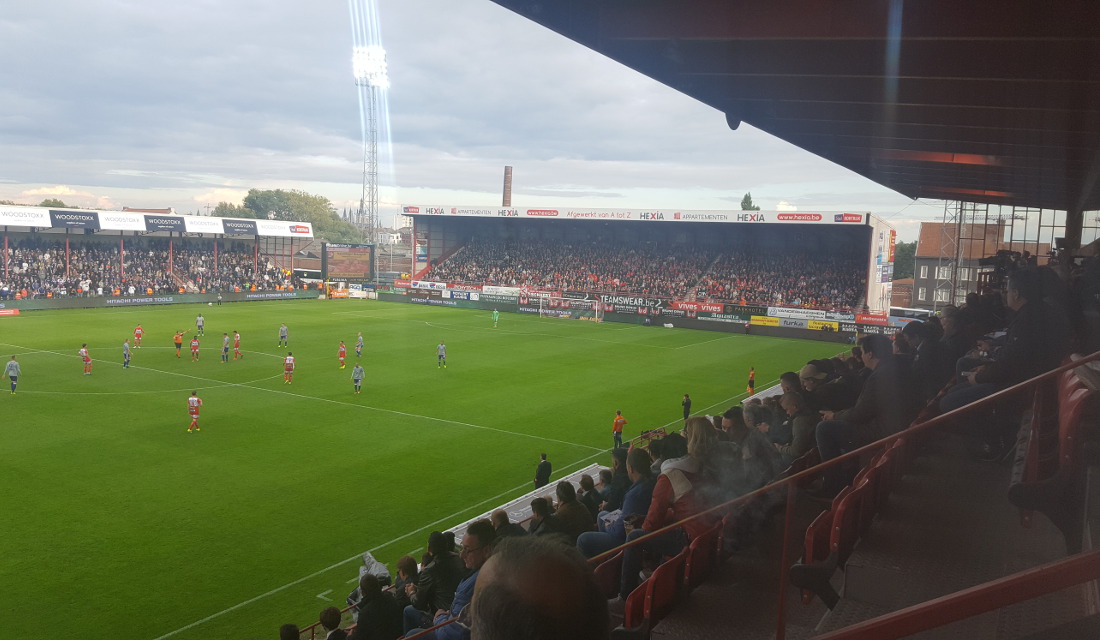 Guldensporenstadion got built right after the end of  World War 2. It officially opened on 17 August 1947.

The stadium underwent a few changes in the 1980s, when first the two stands behind the goals got renovated and next a new main stand was built. This resulted in a capacity of about 15,000 places.

Capacity got reduced again in the late 1990s when one of the stands had decayed to the point that it had to get demolished. It took a decade for the stand to get replaced by a new one, which finally happened in 2008.

How to get to Guldensporenstadion

Instead of walking, you can also catch a bus from the train station to the stadium. Take either bus 4 (to Heule), 40 (to Menen), or 61 (to Ardooie), and get off at stop Kortrijk Stadion (line 4), or stop Kortrijk Meensepoort (line 40 and 61). On matchdays line 4 is the best alternative. The ride will only take 5 to 8 minutes.

Eat, drink, and sleep near Guldensporenstadion

Guldensporenstadion is located just outside Kortrijk’s city centre in a residential neighbourhood mixed up with some offices. Since it’s Belgium, there is the odd local bar around, and there is a lovely fan park in front of the stadium on matchdays with options to eat and drink.

Kortrijk’s small but charming city centre isn’t too far away though and has plenty of options to eat and drink.

Kortrijk is a small city so does not boast a whole lot of hotels and none directly near the stadium, but there are some decent options in the city centre including Center Hotel, ibis Kortrijk, and Parkhotel. Click here for an overview of hotels in Kortrijk.

Tickets for KV Kortrijk games can be bought online, or at the club office at the stadium.

Tickets are also available at the ticket windows of the stadium on the day of the match. Kortrijk rarely sell out but for high-profile matches it is advised to buy in advance.