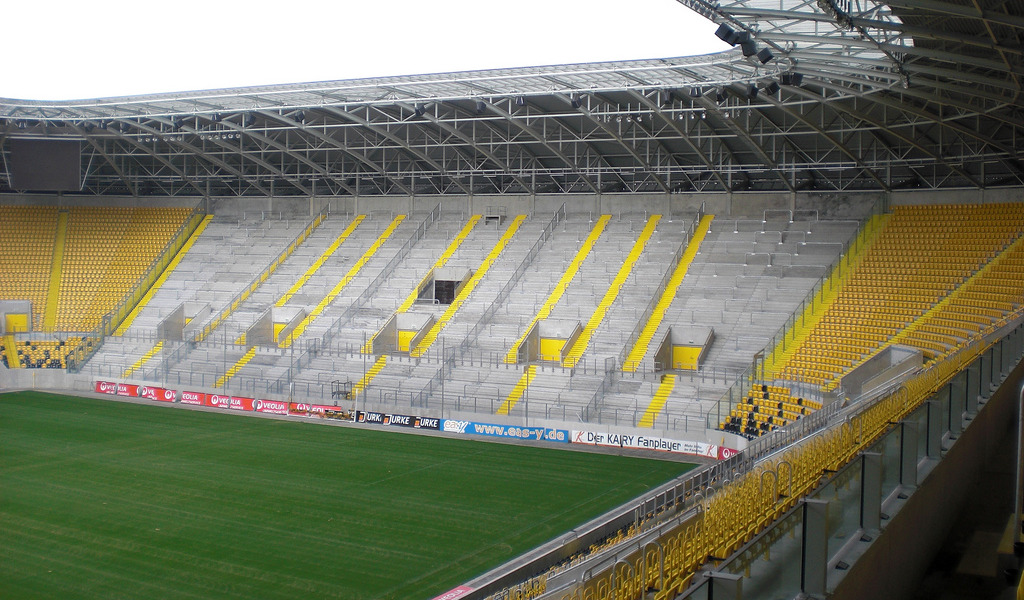 Witness some of Germany’s best football atmosphere at Dynamo Dresden’s DDV-Stadion. The stadium is a rather simple modern single-tiered box, but the passion of the fans makes more than up for it.

DDV-Stadion was built to replace Dresden’s old Rudolf-Harbig-Stadion, which had stood in its place since 1923.

By the 2000s, however, the Rudolf-Harbig-Stadion had significantly aged, lacked modern facilities, and got further damaged during the 2002 Elbe floods.

In 2006, the city of Dresden therefore decided to rebuilt the stadium, and two years later, in 2008, demolition of the old stadium began.

DDV-Stadion, then still called Rudolf-Harbig-Stadion, officially opened on the 15 September 2009 with a friendly between Dynamo Dresden and Schalke 04 (1-2). The stadium had come at a cost of €43 million.

In 2010, the stadium changed names to glücksgas stadion as the result of a sponsorship deal. This deal laster four years, after which it referred back to the name Stadion Dresden. In 2016, a new sponsorship deal with the DDV media group resulted in the name DDV-Stadion.

How to get to DDV-Stadion

DDV-Stadion is located just south-east of Dresden’s historic city centre and just east from Dresden’s main railway station. The walk from both places takes 15 minutes at most.

The stadium can also be reached with tram 9, 10, 11, and 13. Both the stops Lennéplatz and Großer Garten are close to the stadium. Tram 9 can, for example, be taken from the Teaterplatz, tram 9 and 11 from the Postplatz, and tram 9, 11, and 13 from the main railway station.

Central sales points include the Dresden Information Centre at the Neumarkt 2 in the historic centre and the Winer Platz 4 near the main railway station, the SZ-Treffpunkt Altmarktgalerie at the Webergasse 1, and the Konzertkasse im Florentinum at the Ferdinandstraße 12.

Tickets are also available at the ticket windows of the stadium from 2 hours before the start of the match. Dresden’s attendances are among the highest in the league and the club tends to sell out the occasional high-profile match so buying in advance is advised.