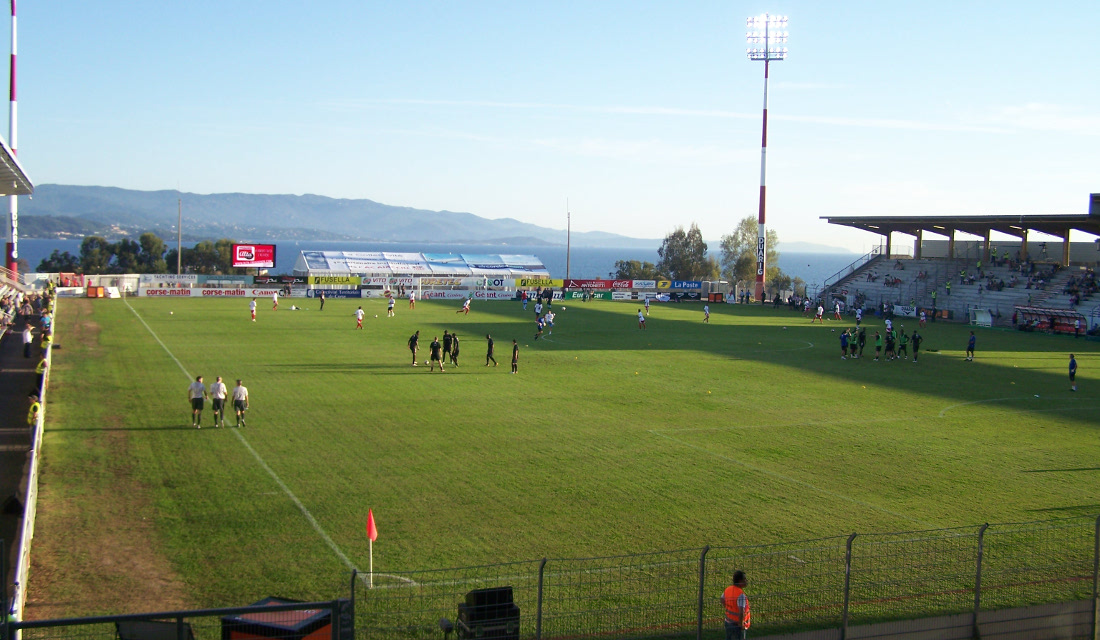 Stade François Coty, also referred to as Stade de Timizzolu, opened on 1 December 1969 with the derby between Ajaccio and Bastia.

The stadium received several minor upgrades in the 2000s and a new east stand was completed in 2010.

Stade François Coty currently consists of three stands, leaving the south end open for a sea view, however tentative plans exist to build a fourth stand that would raise capacity to 12,000.

How to get to Stade Francois Coty

Stade François Coty is located west of the small city of Ajaccio, between the city and the airport at about 4 kilometres from Ajaccio’s railway station and a little more from its city centre. The stadium lies just a few hundred metres away from the Mediterranean coast.

The stadium can be reached with bus 1. Take the bus from the centre (e.g. Place de Gaulle or Cathédrale) in the direction of Vazzio or St Pierre de Cardo. Get off after about 20 minutes at stop Stade François Coty. Buses run once or twice and hour (less on Sundays) with the last bus going at around 7:00 or 8:00 pm.

From the centre (Gare Routière) or the railway station (Gare SNCF) you can also take bus 8 to Aeroport. Get off at stop Pont du Ricanto, from where it is a short walk to the stadium. Service is less frequent, though continues until later in the evening.

The stadium lies close to the N193, which connects Ajaccio with Bastia in the north. The stadium is signposted from the N193 coming from both directions.

Tickets for Ajaccio games can be bought online, at the club store at the 1 Rue de l’Assomption in the city centre of Ajaccio, or at one of the other sales points.

On the day of the match tickets can be purchased on the gate from two hours before kick-off. Ajaccio rarely sell out.

Tickets for regular matches range in price from €12.00 for a seat behind the goal to €30.00 for a premium seat at the main stand.