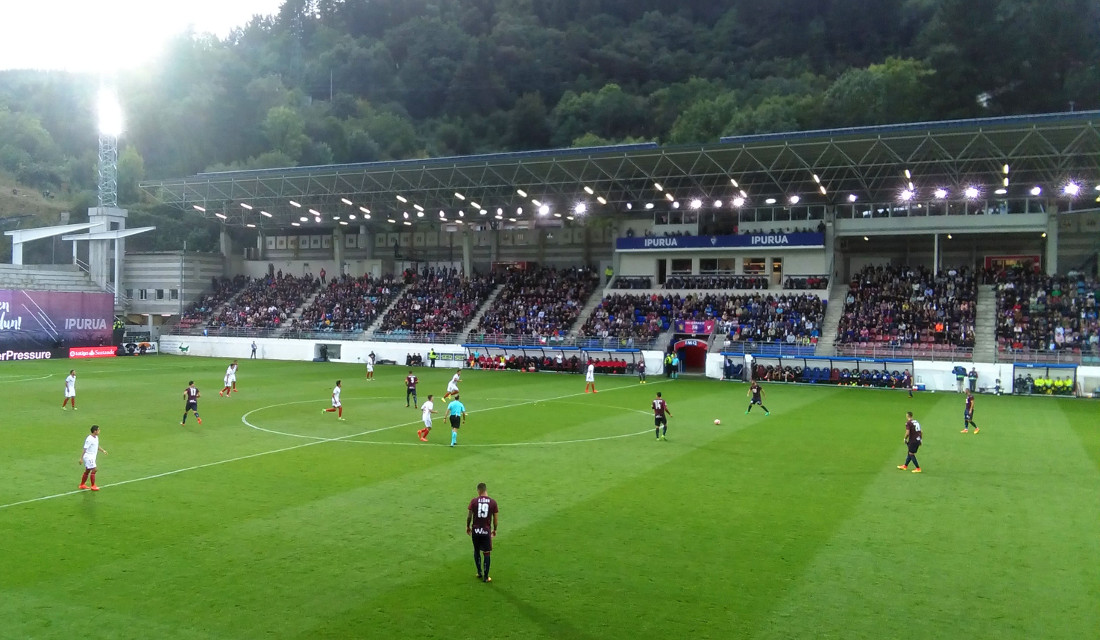 Estadio de Ipurua opened on 14 September 1947 with a match between Eibar and Elgoibar. Before, the local clubs in Eibar had occupied various smaller grounds, but when these clubs consolidated into SD Eibar in the 1940s, a larger ground was needed.

Soon after the opening, works started on building a proper Main Stand, which were completed in 1951. Further improvements were made in the 1970s, including additional cover for the ends and the installation of floodlights.

With Eibar celebrating successes on the pitch in the 1980s and 1990s, a large redevelopment project was started in 1998, including the construction of two new stands at the sides, and the enlargement of both stands behind the goal.

Following Eibar’s promotion to La Liga in 2014, more works were needed to get Ipurua to comply with La Liga requirements, resulting in the construction of a new North Stand in 2015 and a new West Stand in 2016.

How to get to Estadio do Ipurua

Estadio de Ipurua is located just south of the centre of the small town of Eibar. Everything within the town is at walking distance, and walking from either the central square or train station, albeit somewhat uphill, doesn’t take more than 10 minutes.

Eibar is on the Bilbao-San Sebastian line of the Euskotren, Basque Country’s local train network. Station Ardantza (not Eibar) is located closest to the town centre and Ipurua. Trains from Bilbao run twice an hour on the weekends (more often during the week). The journey takes an hour and 10 minutes. Trains run less frequent from San Sebastian: once an hour on the weekends and twice an hour during the week, with the journey taking 1 hour and 20 minutes.

Tickets for Eibar games can be bought online, or in person at the club office at the stadium (closed between 1pm and 4pm).

Tickets can also be bought at the ticket windows of the stadium from 1.5 hours before the start of the match. Despite the low capacity, Eibar rarely sell out, though booking in advance is recommended for high-profile matches like those against Barcelona and Real Madrid and the local derbies.

Eibar is planning to launch stadium tours around Ipurua that include the stands, VIP areas, press room, and club museum. The tours will last about 60 minutes.

Check online for future dates and schedules or email tour@sdeibar.com for more information.