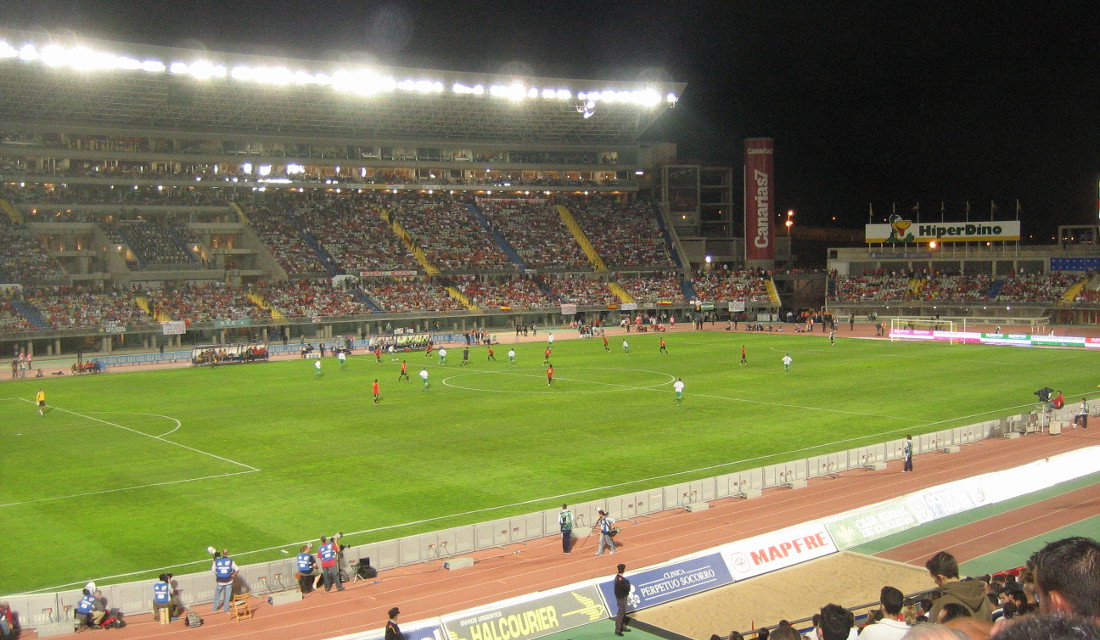 Estadio de Gran Canaria was built to provide the Canary Islands with a new principal sports venue and local side Las Palmas with a modern home.

The stadium officially opened on 8 May 2003 with a friendly between Las Palmas and Anderlecht (1-2). The Spanish national team has twice played an international at Estadio de Gran Canaria.

Its location on the edge of town and athletics track made the stadium little beloved by Las Palmas’ fans, and the club therefore investigated moving back to their old Estadio Insular, which had however fallen into complete disrepair.

Instead, in 2014 refurbishments works started on Estadio Gran Canaria which included removing the athletics tracks, extending the stands closer to the pitch, and repainting the grey seats in the blue and yellow club colours of the club.

How to get to Estadio Las Palmas

The stadium can be reached with bus. Take bus 45 from Parque de Santa Catalina in the direction of Hoya Andrea. Get off on the Avenida Pinto Felo Monzón. Buses typically run every 40 minutes.

Bus 47 is an alternative that can be caught from the same spot. Take the bus in the direction of Tamaraceite and get of at the Calle Arguineguín.

Estadio de Gran Canaria is located in a not very interesting suburban area with little of interest around. Eating and drinking is therefore better done in central Las Palmas, though you may find the odd local bar or restaurant on the Avenida Pinto Felo Monzón. There is also a small shopping centre just south of the stadium with some fast food outlets.

There are neither any hotels close to Estadio de Gran Canaria, and you can therefore best find a hotel at an appealing location in central Las Palmas. Click here for some of the options.

Tickets for Las Palmas matches can be bought online, at the ticket windows or club store at Estadio de Gran Canario, or at one of the other sales points, which include the Bazar Viana store at the Calle Thomas Alva Edison 44 in Las Palma’s city centre.

Tickets are also available at the ticket windows of the stadium on the day of the match. Las Palmas rarely sell out.