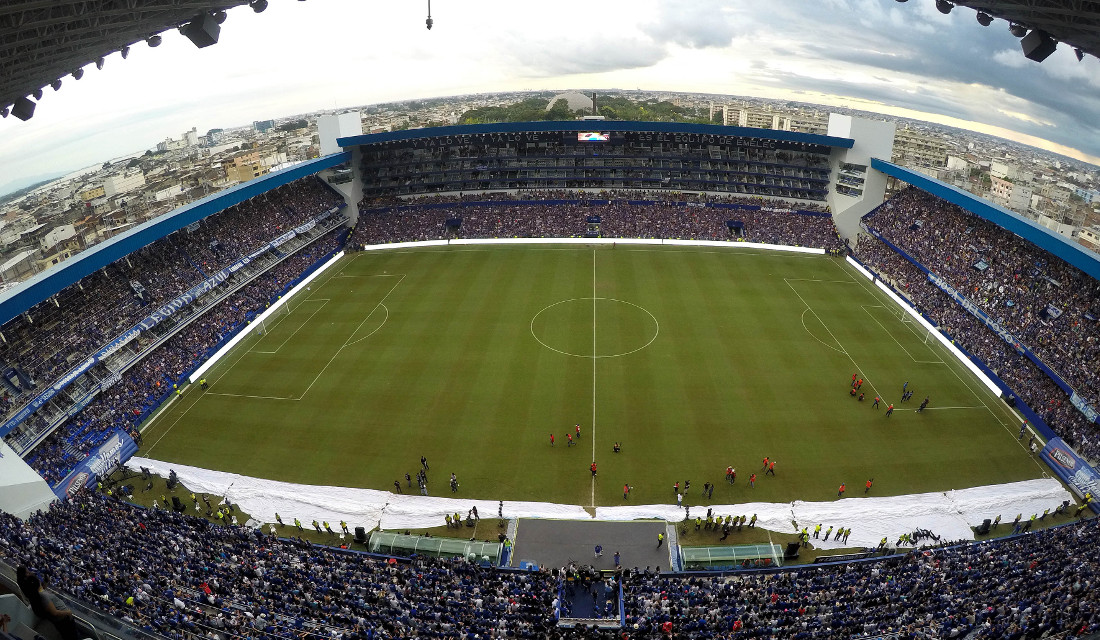 Estadio Banco del Pacifico Capwell, also known as Estadio George Capwell, was built in the 1940s as the new home of Emelec, though the stadium opened on 21 October 1945 with a baseball match.

The first football match at the stadium was played on 2 December of the same year with a match between Emelec and a selection of the Manta-Bahia region (5-4). The stadium was named after the founder the club, George Capwell.

In 1947, Estadio Capwell hosted all games of the Copa America tournament that was held in Ecuador.

In 1959, Emelec moved to the new Estadio Modelo, and by the late 1970s Estadio Capwell had fallen into a state of disrepair. At various moments the club was close to selling the stadium to real estate developers, but fierce resistance of Emelec’s fans prevented this.

It took however until the early 1990s for a large redevelopment project to start, which was completed in 1991. The new stadium could hold 28,000 spectators.

Estadio Capwell got further expanded in 1999 and 2006, but in the early 2010s the club started to make plans again for a larger redevelopment. Works started in 2015 and included the construction of a new main stand, four towers with suites in the corners, and a new exterior. The redevelopment was completed in early 2017.

How to get to Estadio Capwell

Estadio George Capwell is located centrally in Guayaquil just south of the city centre. The walk from Parque Seminario square in Guayaquil’s centre takes about half an hour, that from the southern edge of the Malecon promenade about 20 minutes.

The stadium can furthermore be reached with the Metrovia fixed lane buses. The green line runs right past the stadium on the Avenida Quito.Get off at stop Estadio Capwell. The green line runs further east of the centre past Parque Centenario, through the well off northern areas around the Mall del Sol, past the airport, ending at the bus terminal.

If you find yourself closer to the red line Metrovia that runs alongside the Malecon, catch a bus south and get off at stop El Astillero, from where it’s a 10-minute walk to the stadium. The red line also runs all the way north to the bus terminal.

Tickets for Emelec games can be bought at the ticket office at the stadium, at the Emelec stands at the Riocentro Norte and Riocentro Sur shopping centres (in the north and south of the city), at the Hobbiecars stores at the Mall del Sol and Alban Borja shopping centres, or at the Comandato store at the corner of 9 de Octubre and Garcia Avilez in Guayaquil’s city centre.

Emelec regularly sell out so buying in advance is recommended.

Ticket prices depend on the opponent, but expect to pay from $5.00 for a seat behind the goal to $25.00 for a box seat at the main stand. Expect to pay at least $20.00 for the derby against Barcelona.