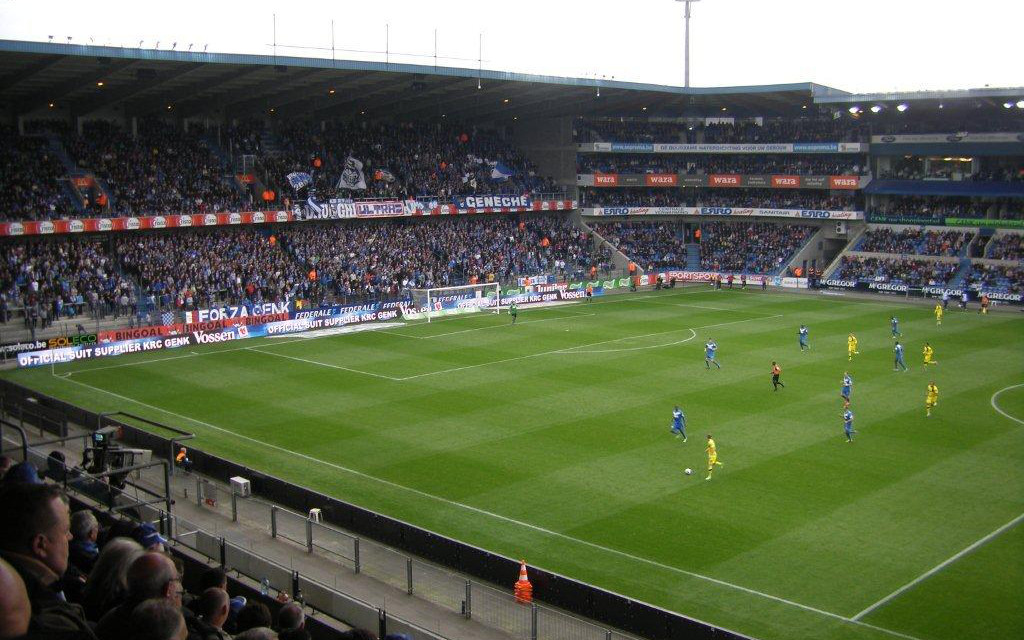 The Luminus Arena, earlier called Cristal Arena, has grown out of the old André Dumontstadion, which until the 1990s used to be the home of local club Thor Waterschei.

After Waterschei merged with Winterslag to form KRC Genk in 1988, the newly formed club initially decided to use Winterslag’s ground, but after two years the club moved back to the André Dumontstadion. In the meantime, a new main stand had been erected, and its name was changed to Thyl Gheyselinckstadion.

The increased successes of the club in the late 1990s led to a major redevelopment program that aimed to turn the stadium into a modern arena. In a first phase two new two-tiered covered stands were built. At the same time a sponsorship deal resulted in a name change to Fenix Stadion.

In 2002, the South Stand got rebuilt in the style of the other new stands, and a few years later the main stand got extensively renovated, resulting in a fully enclosed stadium.

After the renovation in 2007, the naming rights of the stadium were sold to beer brewer Alken-Maes, who named the stadium after local beer brand Cristal. In 2016, the stadium changed name to Luminus Arena following a new sponsorship deal.

Genk has at times considered further expanding the Luminus Arena to either 35,000 or 44,000 places, but currently no actual plans for this exist.

(photos of the present Cristal Arena below)

How to get to the Luminus Arena

The Luminus Arena is located on the northern edge of the city of Genk, approximately 5.5 kilometres from the city centre and main railway station.

From the railway station, take bus G1 in the direction of Zwartberg. Get off at stop Waterschei Kerkhof (or Nieuw Texas) after an approximate 28-minute journey. Buses generally go once every half an hour.

Frequent direct trains connect Genk with Hasselt, the regional capital, which has direct connections with Antwerp, Liege, and Brussels. The journey from Hasselt to Genk takes about 20 minutes. There is also an hourly direct train from Brussels Sud station to Genk, which takes about 1 hour 40 minutes. Nearby Dutch city Maastricht is furthermore about an hour away with bus 45.

Eat, drink, and sleep near the Luminus Arena

The Luminus Arena is located just outside the city bordering a quiet residential area consisting mainly of houses. There are few options for eating or drinking in the area, which you can therefore better do in Genk’s town centre.

There are neither any hotels near the Luminus Arena, but you do have a few hotels to choose from in Genk’s city centre. Click here to see the overview. Alternatively, you can choose to stay in Hasselt, Maastricht, or further afield.

Tickets for Genk games can be purchased online, at the Ticketshop at the Luminus Arena (closed on Mondays and Sundays), or at any of the Group Bruno sales outlets (until noon on the day of the match).

If tickets are still available, these can be bought at the ticket windows of the stadium from 2 hours before kickoff. Genk has decent average attendances of just under 20,000 and sells out the occasional high-profile match, so for high-profile matches booking in advance is recommended.

An open stadium tour runs every first Saturday of the month and starts at 1:30 pm. The whole program lasts 3 hours, with one hour dedicated to the GoalMine museum and two hours to the stadium tour.

Reservations are not required, and the tour runs regardless of attendance. The tour costs €11.00.

Photos of the Luminus Arena