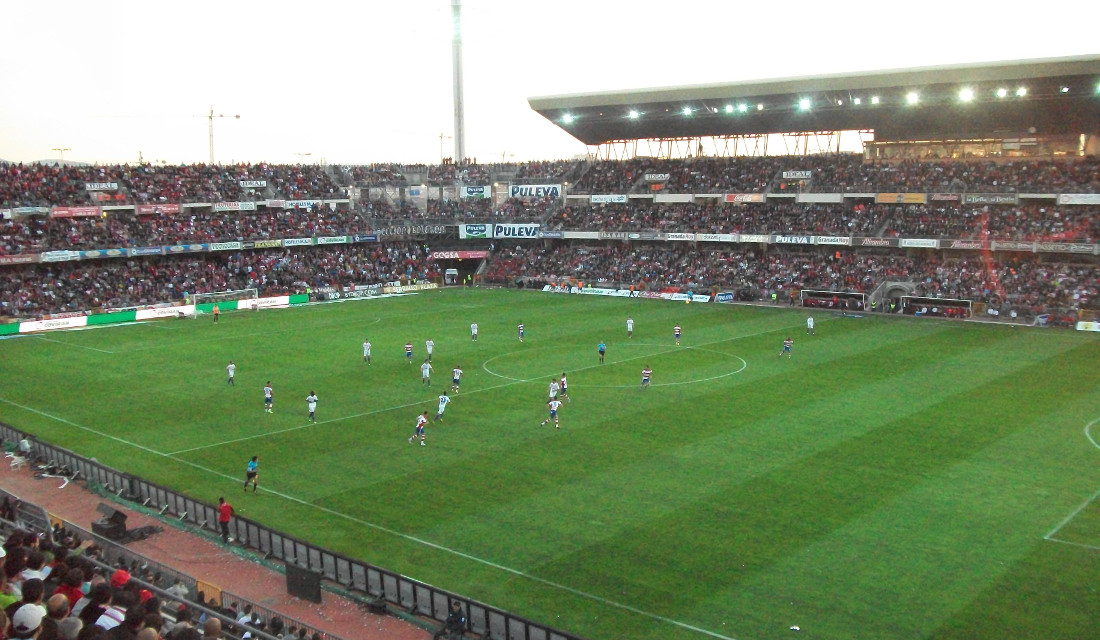 Estadio Nuevo Los Cármenes opened on 16 May 1995 with an exhibition match between Real Madrid and Bayer 04 Leverkusen. The stadium replaced Granada’s old stadium with the same name, but which had stood at a different site.

Granada played their first match at the ground on 22 August 1995: a friendly against Real Betis (4-1).

When Granada promoted to La Liga in 2011, additional stands were erected in the corners, which raised capacity from an initial 16,200 seats to its current amount.

How to get to Estadio Nuevo Los Carmenes

Estadio Nuevo Los Cármenes is located on the southern edge of the city of Granada, about 3 kilometres from the historic city centre and the Alhambra, and about 4.5 kilometres from Granada’s main railway station.

The stadium lies just north of the A-395 motorway, which connects with the A-44 further west, and is thus easily reached by car.

If using public transport, you can get to the stadium with bus 4. Either catch the bus at Avenida de la Constitucion (close to the railway station), or at the Calle Reyes Catolicos in the historic centre. Take the bus in the direction of Torre de la Polvora and get off at stop Pintor Maldonado right in front of the stadium.

Bus 10 connects the stadium with the western and northern parts of the city.

Estadio Nuevo Los Carmenes is located in a quiet residential area composed of apartment blocks. As always in Spain, there will be the odd local cafe and restaurant around, but it’s not the liveliest area in Granada and you’ll more likely find yourself eating and drinking in the historic centre.

If you wish to stay close to the stadium, then the modern Hotel Abades Nevada Palace will be your pick. It is located at the exit of the motorway, gets good reviews, and is just a few minutes walking away from the stadium. Click here for an overview of hotels near Estadio Nuevo Los Carmenes.

However, if you are planning to stay longer in Granada and enjoy the various touristic sights such as the Alhambra, you are likely better off staying in central Granada.

Tickets for Granada games can be bought online, or at the ticket windows of Estadio Nuevo Los Carmenes from a few days before the match.

If tickets remain available, these can also be bought on the gate on the day of the match, but Granada is one of the few Spanish clubs that sell out regularly.

Ticket prices depend on the opponent. Tickets for a typical match range in price from €35.00 for a seat at one of the ends to €65.00 for a seat at the main stand, but expect to pay more for the matches versus Barcelona and Madrid and less for the very low-profile matches.