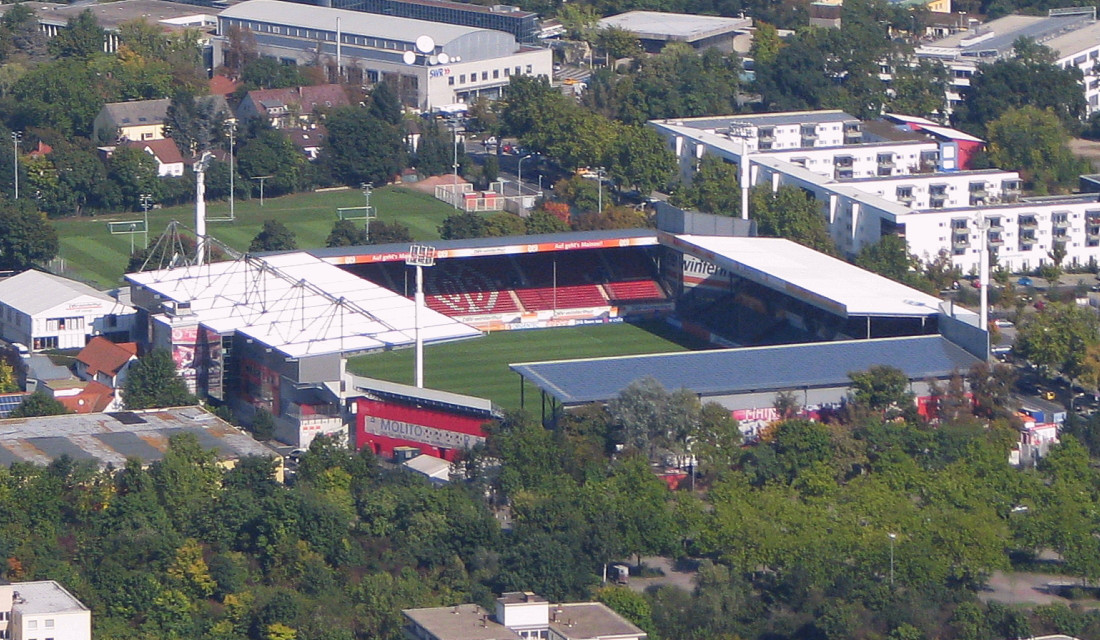 The Bruchwegstadion was for over 70 years the home of 1. FSV Mainz and is the current home of the Mainz’ U23 team 1. FSV Mainz II.

Until 1937, Mainz played their home games at Stadion Fort Bingen, but were forced to move to the Bruchwegstadion to make place for army barracks. The Bruchwegstadion, which had been built in 1929, at that time only consisted of one uncovered stand and a running track.

Mainz’s stay at their new home was short-lived though as they had to move away after the stadium was severely damaged in World War II. It took until 1949 before the club could return.

In the 1950s, the stadium got gradually improved and expanded and reached a capacity of about 20,000, but in the next decades few changes were made save for the construction of additional roofs in 1981.

Overall, the stadium remained a rather poor affair and few comforts were offered to the small crowds that showed up in Mainz’s darkest years when they struggled in the regional amateur leagues.

However, by the late 1980s Mainz’s fortunes slowly started to change and with their promotion to the 2. Bundesliga the crowds gradually returned. For several high-profile matches the club even arranged removable bleachers for the empty southern end. Floodlights were finally installed in 1995.

In 1997, the temporary bleachers got replaced by a more permanent steel construction. At the same time a similar construction was erected on the other end of the stadium.

In the early 2000s ,Mainz regularly challenged for promotion and the successes prompted the club to embark on a major renovation program. Two new stands got built, the main stand and a stand at the opposite side, and further makeshift stands were installed to fill two of the four corners. All just in time for Mainz’s promotion to the Bundesliga in 2004.

Their subsequent stay in the Bundesliga however also made it clear that the Bruchwegstadion still lacked the facilities of the many new Bundesliga stadiums that had been built. Therefore, only three years after the completion of the new stands, Mainz already started making plans to build a new stadium.

Two years later, in 2009, construction of the Coface Arena began, and in 2011 Mainz moved to their new home. Mainz played their last official match at the Bruchwegstadion on 14 May 2011 when the club beat St. Pauli 2-1. In its final years the stadium could hold 20,300 spectators.

The Bruchwegstadion, owned by the club, has not been demolished since Mainz moved out but has become the home of Mainz’ U23 side that plays in the lower professional leagues.

How to get to Bruchwegstadion

Tickets for Mainz II games can bought in advance at the Fan Shop at the Opel Arena or on the day from two hours before the start of the match at the ticket windows of the Bruchwegstadion.

There is no need to buy in advance as FSV Mainz II never sell out.