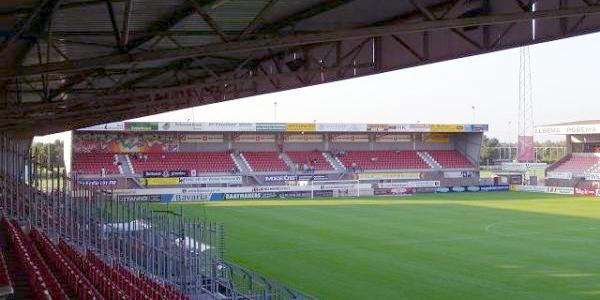 SolarUnie Stadion only consists of three stands. One of the short ends is left open with just the scoreboard.

How to get to SolarUnie Stadion

SolarUnie Stadion is located about 2 kilometres north-east of Helmond’s small city centre, and a similar distance from Helmond’s main train station (which lies just south of the city centre). The walk from both places will take less than half an hour.

Tickets for Helmond games can be bought at the club office at the stadium, or at one of the Ticketbox sales points, of which the Primera Kroon at the Ameidestraat 14 in Helmond’s city centre is the most centrally located.

Tickets are also available at the gates of the stadium on the day of the match. Helmond Sport only sells out the occasional high-profile match.