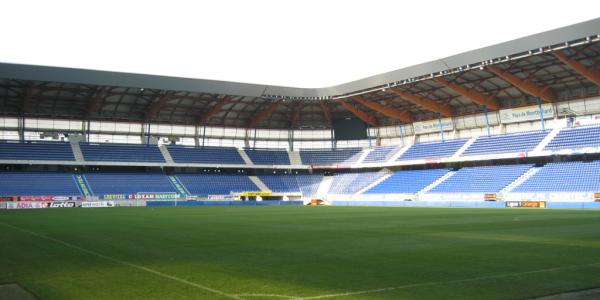 Stade Auguste Bonal was built in 1931 to provide FC Sochaux with a proper home after the club had seen crowds grow rapidly in the first three years of their existence.

The stadium was built with the help of car manufacturer Peugeot, which are home to Sochaux, and a site was chosen close to the Peugeot factories.

Stade Auguste Bonal, than still called Stade de la Forge, officially opened on the 11th of November 1931 with a match between Sochaux and Stade de Francais.

The stadium initially only consisted of only one stand that could hold 1,000 spectators, but in the following years the stadium got gradually expanded, resulting in a capacity of around 10,000 in 1935.

After the Second World War, the stadium got renamed after Auguste Bonal, a director of the club who got killed in the war.

In the following five decades, few changes were made to the stadium, and by the 1970s the stadium had gotten rather outdated. A small renovation in 1973 proved to be just enough to be able to host European Cup matches.

However, by the mid 1990s the stadium had deteriorated again to a point at which it could hardly host Ligue 1 matches. A major redevelopment program was started, inspired by Stade Michel d’Ornano, which would gradually transform the stadium into a modern arena.

Over a period of three years, starting in 1997, four new stands got built. Stade Auguste Bonal reopened on the 22nd of July 2000 with a match between FC Nantes and AS Monaco.

The walk from Montbéliard city centre (and train station) to the stadium takes about 10 minutes. The walk from Sochaux town centre, with its Peugeot museum, takes slightly less than half an hour.

Montbéliard is only served by regional trains, and a change in nearby Besançon or Belfort is necessary to reach the city.

If arriving by car from the A36, which runs south of the city, take exit 8 Montbéliard, follow the signs for the city centre (centre ville), and then the signs for Stade Bonal.

Tickets for FC Souchaux matches can be purchased online, at the Club Shop at the stadium, at the Francebillet and Ticketnet sales outlets, or any of the other selected sales points.

Tickets can also be purchased at the ticket windows of the stadium on the day of the match. Sochaux tend to sell out only one or two high-profile games per season.