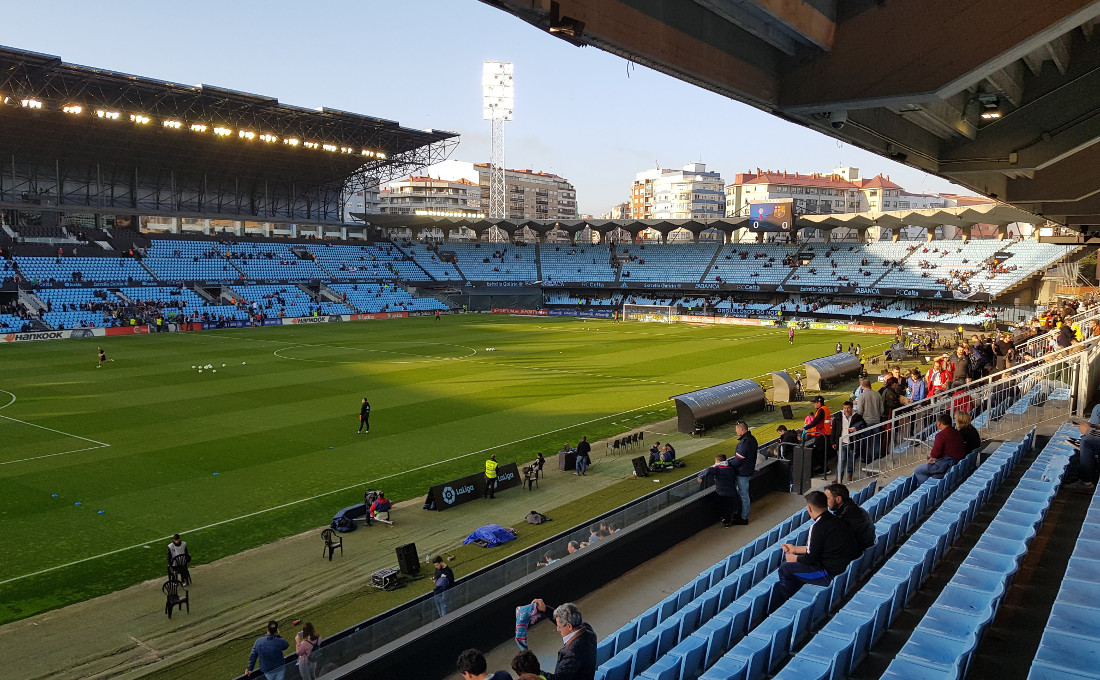 Estadio Municipal de Balaídos opened in 1928 after a three-year construction period. The first match was played between Celta and Real Union on the 30th of December of that year (7-0).

The stadium got gradually improved over the next decades, but received its current shape between 1968 and 1971 when three of the four stands got rebuilt. The result was an enclosed fully covered bowl with a capacity of 40,000 places.

The one remaining old stand, the south stand, got rebuilt for the 1982 World Cup. The new two-tiered stand was significantly larger than the previous stand, but because seats were installed in most parts of the stadium capacity dropped to 33,000.

Estadio de Balaidos hardly changed in the following decades and over the years severely aged. In 2010, plans were presented for the complete rebuilding of the stadium into a modern 42,000-seater, however as these were part of the failed Spanish 2018 World Cup bid, these got eventually shelved.

A few years later though, new more modest plans were presented for a gradual renovation and rebuilding of the stadium with the stands being extended towards the pitch, refurbished, and a new roof and exterior covering all stands.

Works began in the summer of 2015 on renovating the Tribuna stand on one of the sides, which were completed in early 2017. The next phase is going to be the redevelopment of the Rio stand on the other side.

(photos of the present Estadio de Balaídos below)

How to get to Balaidos

Estadio de Balaídos is located in the south-west of the city of Vigo at about 3 kilometres from its historic city centre and a little more from the train station.

The stadium lacks an easy transport connection, but it’s a long walk of around 45 minutes with some elevation to conquer from either the modern city centre near Urzaiz train station or the historic centre down the hill near the coast.

The alternative is catching a bus or taxi. From the modern centre, any bus that runs down the Gran Via will do (get one from, for example, Plaza de Espana). Get off at the Praza de America roundabout and walk 10-15 minutes down the Avenida do Fragoso towards the stadium. Buses include the 16, 23, and H2.

Eat, drink, and sleep near Balaidos

Estadio de Balaidos is located in a lively residential area with loads of bars and restaurants around, directly opposite the stadium or along the Avenida do Fragoso or Avenida da Florida. It’s a pleasant area to spend some time before the match, but bear in mind that, as often in Spain, once inside the stadium there are few options to eat.

The area around Balaidos does not house many hotels, but with Hesperia Vigo, Hotel Coia de Vigo, and Hostal Geneve there are a few options at walking distance. Otherwise there is a good selection of hotels in Vigo’s historic centre and around Urzaiz train station in the modern centre.

Click here for an overview of hotels near Estadio de Balaidos and here for further options in Vigo.

Tickets for Celta de Vigo games can be bought online, or at the ticket windows of the stadium from a week before the match. The club may restrict online sales to Spanish citizens (requiring a DNI number) and in those cases the club can be contacted to arrange a ticket in advance.

Tickets can also be bought on the day at the stadium. Celta only sell out the odd high-profile match.

Ticket prices depend on the opponent, but typically range in price from €20.00 for a seat behind the goal to €50.00 for an upper-tier seat at the main stand. Expect to pay significantly more for the derby against Deportivo and the Barcelona and Madrid games.