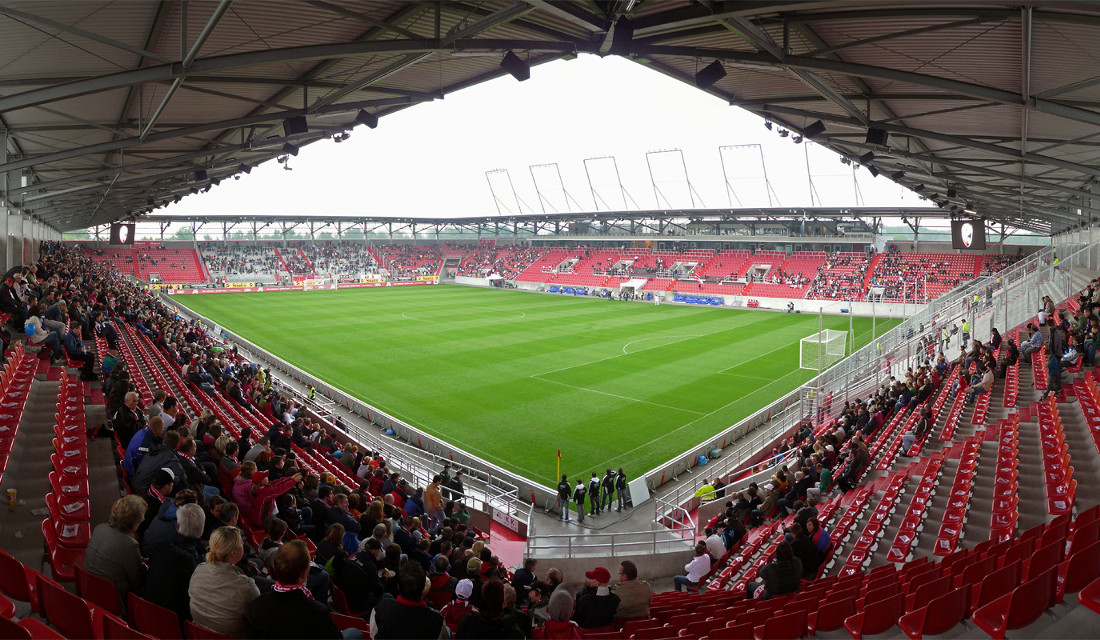 The stadium got built at the terrains of the Bayernoil refineries on the south-eastern edge of the city. It came at a cost of about €20 million, which was completely paid for by the club and their main sponsor Audi.

Audi Sportpark officially opened on the 24th of July 2010 with a three-team tournament involving Ingolstadt, Wolfsburg, and Augsburg.

The stadium counts with a total of 1,350 business seats and 18 VIP lodges. It can furthermore be easily expanded to a capacity of 30,000.

How to get to Audi Sportpark

There is regular train service from Munich and Nuremberg to Ingolstadt. The journey from Munich takes 45 to 60 minutes, whereas the ride from Nuremberg takes no more than half an hour.

There is no direct public transport connection from Ingolstadt’s main rail station (Hauptbahnhof) and it may therefore be better to catch a train that stops at station Ingolstadt Nord (less frequent trains, but located closer to the historic centre).

From the central bus terminal (ZOB), which is located on the northern edge of the historic centre and a short walk away from Ingolstadt Nord, you can catch bus 51 to the stadium. Take the bus in the direction of Audi-Sportpark, which is also the last stop on the line.

From the historic centre (Stadttheater) you can also take bus 21. Again, take the bus toward Audi-Sportpark and get off at the final stop. Both buses run at least every half an hour. The ride takes about 15 minutes.

On matchdays there is a shuttle service (line 202) that starts at ZOB and goes through the historic centre to the stadium. Buses run every 15 minutes from two hours before kickoff.

If coming from the main rail station, it is best to first take a bus to the centre and then follow as above.

Audi Sportpark is located on a business park on the edge of the city. There is a nearby retail park with some fast food options if you need something to eat, but overall it is an unattractive area and eating and drinking is better done in Ingolstadt’s city centre.

There are no hotels directly near the stadium, but Auwald Hotel and Art Hotel Ingolstadt are both good options at about half an hour walking away from the stadium.

There are a few more hotels in the centre of Ingolstadt, but most will decide to travel in and out for the match and stay in Munich or Nuremberg.

Tickets can also be bought at the gates of the stadium on the day of the match. Ingolstadt don’t normally sell out in the 2. Bundesliga save for the odd high-profile match.

Tours typically run on Tuesdays and Wednesdays at 10:00am or 3:00pm. Check the website of Audi Sportpark for current dates and times. The tour costs €8.00.