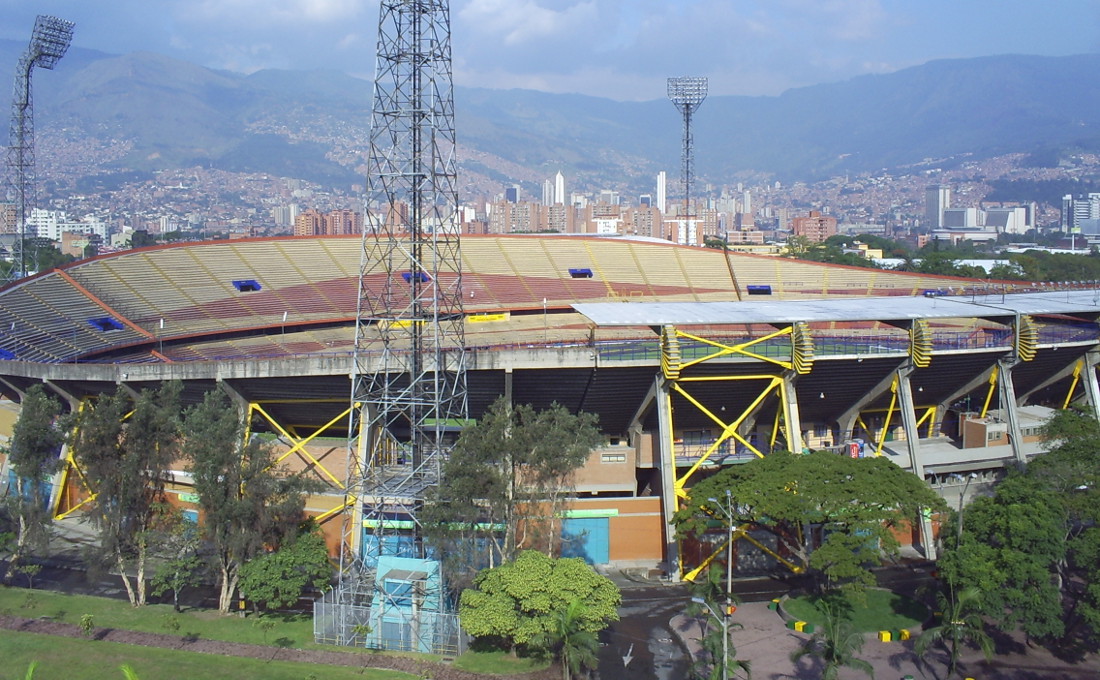 Estadio Atanasio Girardot opened on 19 March 1953. The stadium was remodelled in 2011 for the U-20 World Cup that was played in Colombia that year.

Along with being the home of both Medellín clubs, the stadium has also occasionally hosted matches of the Colombian national team.

How to get to Estadio Atanasio Girardot

The stadium is easily reached by (overground) metro. Stop Estadio is next to the stadium. Take metro line B from stop San Antonio in the city centre. From San Antonio one can connect with line A to northern destinations as well as the Poblado area in the south.

Many buses pass the stadium on Calle 50 (Av. Colombia) north of the stadium, or Calle 48 south of the stadium. Several of these can be boarded at Parque Berrío in the centre. Ask the bus driver for confirmation.

The area around Estadio Atanasio Girardot is well-off and generally safe. Most of it is residential, but toward the south runs the Carrera 70, which is one of the city’s principal nightlife areas and lined with bars and restaurants. The 70 runs south until the UPB University campus, and somewhat further on, on the Calle 33, is another spot of nightlife.

The area is a convenient place to stay in as it provides good access to other parts of Medellín through the metro, and there are therefore various hotels close to the stadium.

Right south of the stadium lies Hotel Egina Medellín, which gets good reviews and is not unreasonably priced. Further on along the 70 are Hotel Florida, Hotel Boliariana Plaza, and Casa Hotel Asturias. Apart Hotel Estadio Real is in a quieter area just west of the stadium, while TRYP Medellín Hotel is a more upscale alternative directly north of it.

For all hotels near Estadio Atanasio Girardot click here. Hotels are generally cheaper in the downtown area, but mind that it gets rather dodgy at night. Many tourists furthermore stay in the upscale Poblado area in the south of the city.

Tickets for Atlético Nacional games can be bought at the ticket windows (taquillas) of the stadium, or at one of the selected pre-sales outlets.

These outlets include the club stores at the tall Coltejer building in Medellín’s downtown and El Tesoro shopping mall in the Poblado area.

Tickets are also generally available on the gate on the day of the match, and will only sell out for the derby and high-profile play-off matches.

Tickets for DIM matches can be bought at the ticket windows or club store at the stadium, or at any of the selected pre-sale points, which include the club store at Calle 46 in downtown near San Antonio metro station.

Tickets are also available on the gate on the day of the match.

Ticket prices are the same as those of Nacional. For more information email boleteria@dim.com.co.