Football used to be the sport of the working masses, but this has long ceased to be the case. These days, it is not unusual for fans having to save instead to be able to watch some live football from the stands.

But while in particular fans in England have been complaining about continuously rising ticket prices, the global picture is more ambiguous. For example, the Bundesliga has often been cited as the more affordable alternative.

Last month, we bumped into a chart in The Economist that showed how long people in various countries have to work to be able to buy a beer. Instantly inspired, we realised this would be a great way to compare the ticket prices across countries.

We did some reverse engineering on their numbers (from bank UBS) to get the median wages, calculated average ticket prices*, copied the design of the chart (it’s ok, they’re rich), added the numbers, and concluded that the English are not the worst off if it comes to the work they have to put in to buy a football ticket.

Instead, that “honour” goes to the Brazilians, who have to sweat for over 3.5 hours before they can go see their team. The combination of relatively low wages and high ticket prices seems to be prevalent in South-America as we see Colombia ranked fourth and Argentina sixth.

In Europe, England is indeed the most expensive, in real terms as well as adjusted for wages, though the lower wages in Spain make that they are not far behind.

The gap to the rest of Europe is significant and it turns out Eastern Europe is the place to go for cheap football. In Romania and Ukraine one can visit a match for less than $ 2.50, and the higher wages in Romania make that the Romanians can head to the game after just 24 minutes of work. Keep in mind that most of the Eastern European clubs included in our sample are already playing at brand-new modern arenas.

Football, or soccer in this case, is (still) relatively cheap in the United States, while watching football in South Korea is surprisingly much cheaper than in neighbour Japan.

Most of these tickets are for a seat, though for two of the countries they are for the standing sections: Germany and Argentina. If we leave standing out of the equation, Germany is still relatively cheap – they will move to 8th place below the Serie A -, but Argentina jumps all the way to the top spot just above Brazil. And as we have only looked at the cheapest ticket, that does not even include the $170.00 River Plate fans have to pay for a seat at the Superclásico this Sunday. 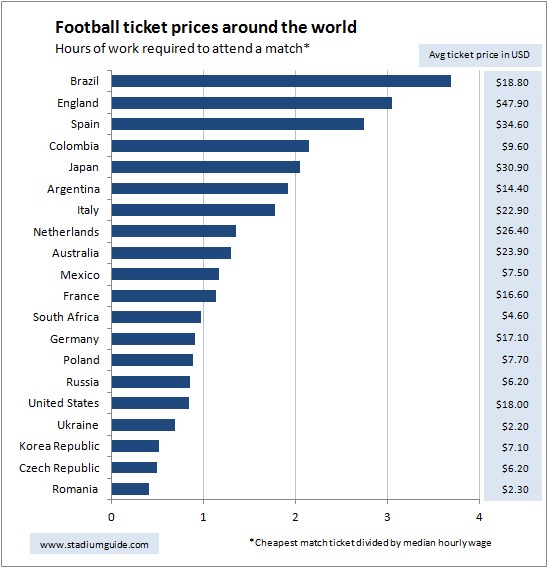 You can find a version of the chart in GBP here, and one in EUR here. We are planning to publish more insights on ticket prices around the world in the upcoming weeks.