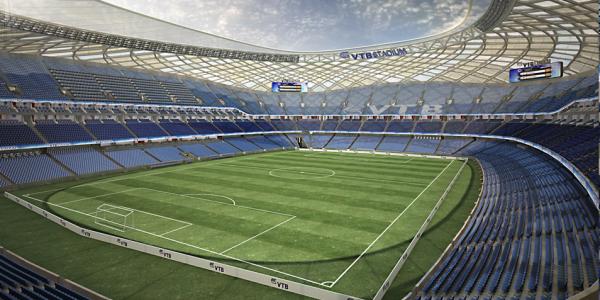 The VTB Arena is the currently under construction new stadium of FC Dynamo. It has a planned capacity of 27,000 seats.

First plans for the stadium were published in the summer of 2010 and presented a new stadium to be built on the site of the old Dynamo Stadium that had closed in 2008. Part of the facade, that is listed as a monument, was to be preserved in the new stadium design, though most of the old stadium would be demolished.

The total project consists of a football stadium, multi-use indoor arena, and several real-estate projects, all with a complete value of $1.5 billion. The stadium and arena will be integrated under one roof. The stadium design is by Manica Architecture.

The seats of the VTB Arena will be divided over three tiers, and will include a total of 6,750 business seats and 98 VIP boxes. One of the arena’s stand-out features is a 85-meter long LED screen at one of the short ends.

The project is led by the VTB Bank, which is for 85% owned by the Russian government and itself owns 75% of FC Dynamo Moscow. The stadium has temporarily been named after the bank, but it is expected that ultimately a naming rights sponsor will be sought.

The VTB Arena is located about 5 kilometres north-west of Moscow’s city centre, just outside the second ring road. Demolition of the stadium started late 2011 and was completed in 2012, after which construction of the new arena started.

The VTB Arena was initially scheduled to be completed in 2016, however that deadline has not been made and the stadium is now expected to open in late 2018.

Images of the VTB Arena