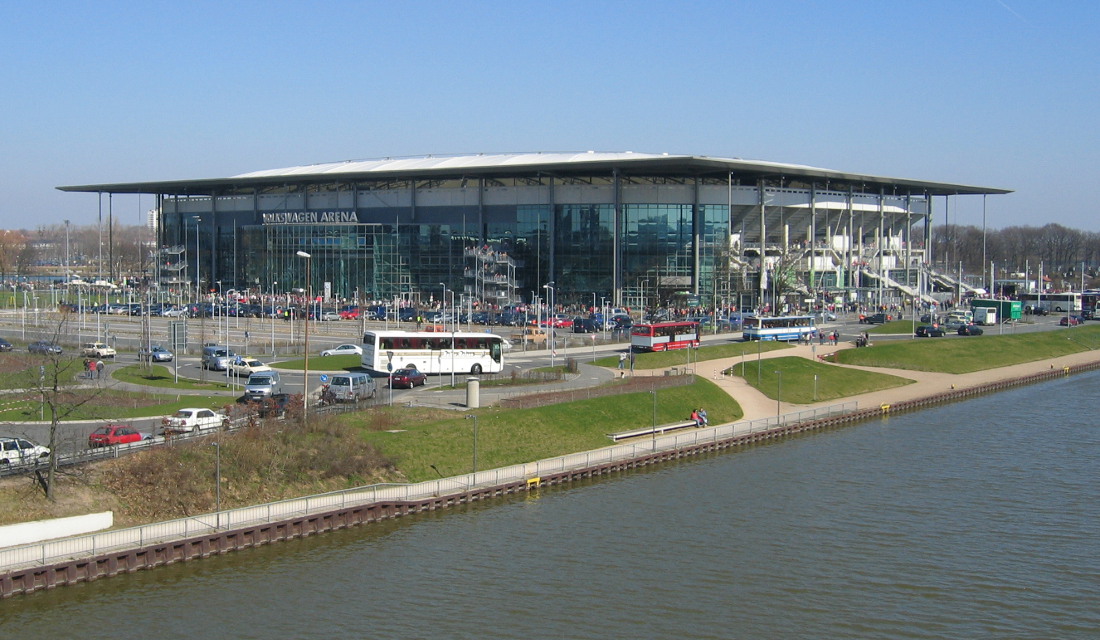 The Volkswagen Arena was built between May 2001 and December 2002 and replaced Wolfsburg’s old VFL Stadion. The stadium officially opened on 13 December 2002. The first match, between Wolfsburg and Stuttgart (1-2), was played two days later.

The Volkswagen Arena came at a cost of €53 million. It counts with 1,434 business seats, 31 VIP lodges with room for 332 people, and a sky lounge that can seat 56 people.

How to get to the Volkswagen Arena

The Volkswagen Arena is located just north-east of Wolburg’s main railway station and city centre. The walk to the stadium, during which you cross the railroad tracks and a canal, will take about 15 to 20 minutes.

If arriving by car, the Volkswagen Arena is best reached from the A39 (which connects with the A2 just south of Wolfsburg). Take exit 3 Wolfsburg-West, follow the L321 into the city, and, after having passed the railway station, take the ramp left to Vorsfelde / Nordstadt. Take the first exit after the bridge (Berliner Brücke). The stadium will be clearly visible from the bridge.

Eat, drink, and sleep near the Volkswagen Arena

The Volkswagen Arena sits right next to the massive Volkswagen factories and the Autostadt theme park, one of Germany’s most popular tourist attractions. It is furthermore bordered by a pleasant park with swimming pool, ice rink, and artificial beach, including a beach club.

Alternatively, you can find some eating and drinking options in the nearby city centre, though, it being an industrial city, Wolfsburg is not one of Germany’s most attractive cities.

There are not many hotels in Wolfsburg, but if money is no issue, then the Ritz-Carlton on the nearby Autostadt is an excellent option at short walking distance of the stadium. Near the railway station, so still at walking distance, the Tryp Wolfsburg and Inside by Meliá Wolfsburg are somewhat cheaper alternatives, or, again somewhat further away, the Porsche Hotel and Hotel Global Inn for those on an even tighter budget.

Click here for an overview of hotels near the Volkswagen Arena, though you may also want to consider staying in either Hanover or Brunswick, both more pleasant cities with frequent train connections that take only 20 to 30 minutes.

Tickets for Wolfsburg games can be bought online, by phone +49 (0) 5361 8903 903, at the Fanshop at the Volkswagen Arena, or at the club’s fanshop at the Kaufhofpassage 6 in Wolfsburg’s city centre.

Wolfsburg tend to sell out about a third to half of their home matches, though tickets for most matches should be easily available if bought in advance.

Wolfsburg have divided their home matches into four pricing categories, though most home matches fall into the second-cheapest category 3. Ticket prices for these matches range from €19.00 for a seat behind the goal to €44.00 for a central seat at one of the sides. Standing costs €15.00 for all price categories, but the costs of a seat goes up to between €35.00 and €70.00 for the most expensive matches.

Tours run Tuesdays to Fridays at 2:00 pm, and one the weekends at 11:00 am and 1:00 pm. Check the official website to confirm the current schedule. Reservations are not required.

Photos of the Volkswagen Arena