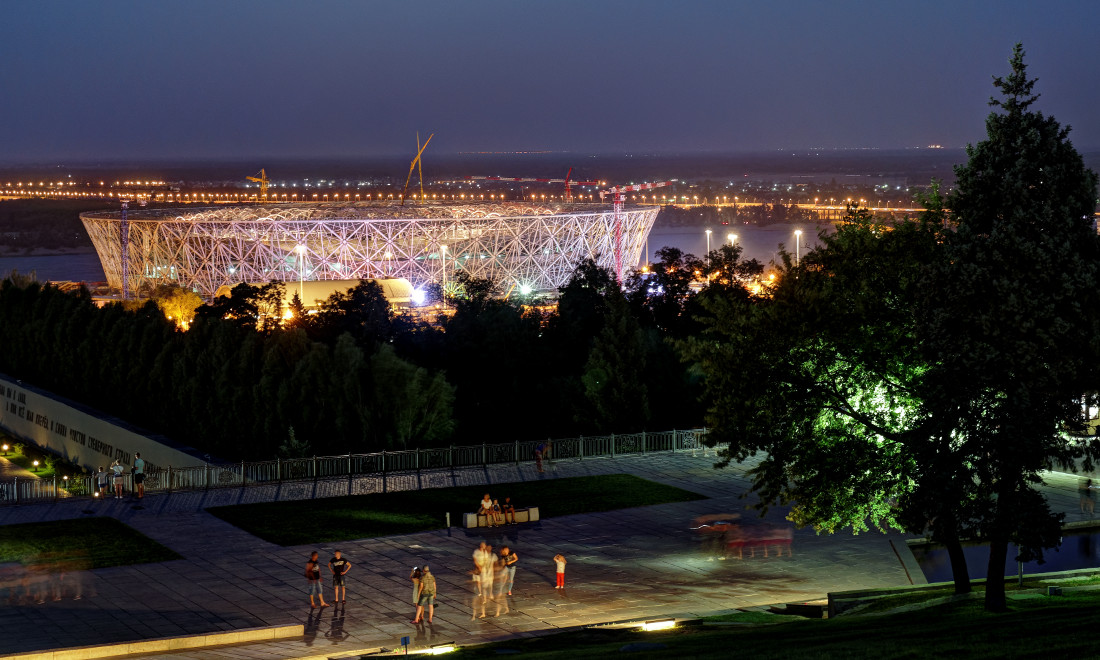 The Volgograd Arena is the recently opened new stadium in the city of Volgograd in southern Russia. It got built with the purpose of serving as one of the playing venues of the 2018 World Cup, and has become the new home of Rotor Volgograd.

The stadium got built at the site of the former Central Stadium, which used to be Volgograd’s principal stadium. Demolition of the old stadium started in late 2014, and construction of the new arena got going in the spring of 2015.

The Volgograd Arena has a capacity of 45,000 seats divided over two tiers. The cabled roof and meshed exterior are the standout features of the arena. After the World Cup, capacity will be reduced to 35,000 seats.

During the World Cup, the Volgograd Arena will host four first round group games.

How to get to the Volgograd Arena

The Volgograd Arena is located on the banks of the Volga river, just north of central Volgograd at roughly 4 kilometres of the city’s main square, the Square of Fallen Fighters, and the main railway station.

The stadium can be reached with the Volgograd Metrotram, which runs from the centre north-east along the river Volga. The tram can be boarded at various stops in the centre. Get off at stop Central Stadium next to the stadium. During certain high-profile matches, the last stop is Europa Mall, from where it’s a 10-minute walk to the stadium.

Eat, drink, and sleep near the Volgograd Arena

A short walk south of the stadium lies the large Europa Mall, where you can find various food outlets including some international fast food chains. Apart from that there’s not much around in terms of eating and drinking.

If you wish to stay close to the stadium, then the Hilton Garden Inn Volgograd will be your pick. Located next to the Europa Mall, it’s a short walk to the stadium. Alternatively, especially if you’re on a tighter budget, the Formula 1 Hotel and Sonberri MiniHotel are decent options close to the stadium. There are furthermore a few hostels in the area, and of course plenty of apartment rentals.

Click here for an overview of hotels near the Volgograd Arena, or here to explore other options in central Volgograd.

Photos of the Volgograd Arena