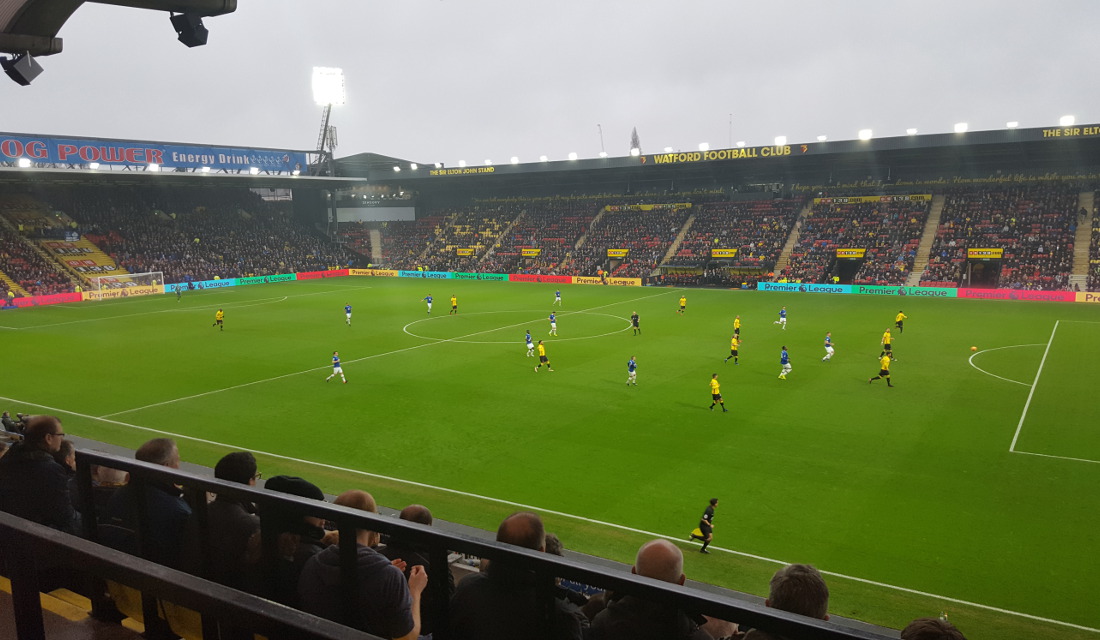 Watford FC moved to Vicarage Road in 1922 after it had been playing for 23 years at a ground on Cassio Road. The club played their first match at the new ground on the 30th of August 1922 against Millwall.

Vicarage Road back then consisted of two small covered stands and several terraces. One of these stands, the Union Stand, had been brought from Watford’s previous round on Cassio Road. About a decade later, the Union Stand got replaced by a new stand, the Shrodells Stand.

Further developments to the ground were made in the 1950s and 1960s, among which in 1969 an extension to the Main Stand.

The Shrodells Stand was again replaced by a new stand in 1986. The new Rous Stand consisted of two tiers and introduced corporate facilities to the ground.

In 1993 and 1995, following the Taylor report recommendations, two new stands were built at both ends. This only left the original main stand from 1922 and its extension in place.

After the original part of the main stand had already been closed in 2004 following safety concerns, it was demolished in 2010 as a result of further doubts regarding the state of the stand.

Plans were made for the construction of a new stand, which got delayed until 2014 when the new Sir Elton John Stand opened. Soon after following the promotion of Watford to the Premier League, the stand got expanded with additional rows of seating towards the pitch.

How to get to Vicarage Road

Vicarage Road is located at short walking distance from Watford’s High Street. The walk west from the town centre takes no more than 10 minutes.

Regular trains depart from London Euston to Watford Junction rail station. The journey takes about 20 minutes. The stadium lies another 20 minutes walking from the station, or take bus 10 in the direction of Holywell. Buses leave regularly.

Watford is also connected to London by the underground. Watford tube station is the last stop of one of the branches of the Metropolitan line. From Baker Street it takes about 40 minutes to get to Watford. The station is about 1 mile north-west of Vicarage Road, which means an approximate 20-minute walk.

If arriving by car, take either junction 19 or 20 from the M25 motorway. Follow for A41 Watford and after about a mile for A411 Watford. After about 2.5 miles, at the roundabout, turn right onto the A412 Rickmansworth. From there on follow the signs for Watford General Hospital. After a few turns you will drive past the stadium on your left.

Vicarage Road is located right near the town centre of Watford, which while not the most exiting part of the Greater London area, boasts its reliable mix of high street chain restaurants and local pubs.

There is no great choice of hotels in Watford, but the national chains Premier Inn, Jurys Inn, and Best Western are all satisfying options at walking distance of Vicarage Road. The Holiday Inn Watford Junction is a little further away, but gets even better reviews. Click here for an overview of all hotels near Vicarage Road.

If tickets remain available, these can also be bought at the Ticket Office on the day of the match, though Watford sell out most matches since returning to the Premier League.