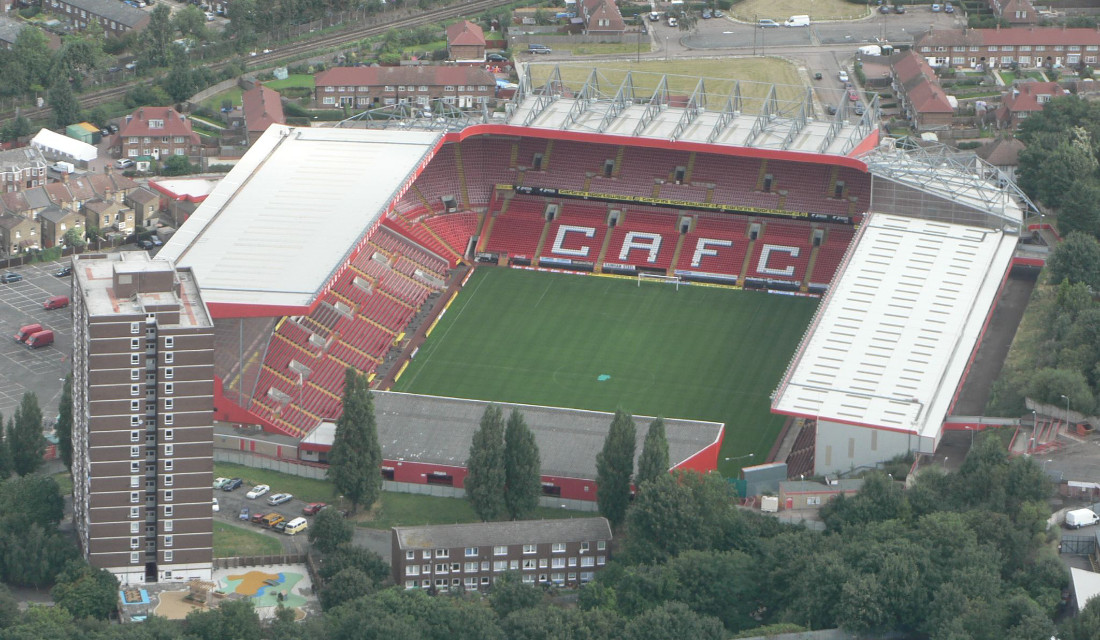 Charlton Athletic had already played at various ground when they first moved to The Valley in 1919. The stadium was built with the help of their fans, though initially only consisted of a pitch and large earth banks, giving it the appearance of a valley.

In 1923, Charlton moved shortly away to The Mount at Catford, but after a proposed merger fell through, moved back to The Valley.

The stadium got gradually developed over the next decades, most of all by turning the earth banking into concrete terraces and by the construction of a covered main stand.

In the late 1930s, The Valley was one of England’s largest stadiums, and the massive east terrace the largest in the country. The stadium set its record attendance of 75,031 spectators during an FA Cup match with Aston Villa in 1938.

Few changes were made in the following decades, until in the late 1970s a modest new main stand was built and a few years later the new covered Jimmy Seed Stand at the southern end.

Soon after, however, the club went into administration, and while a supporters’ trust managed to acquire the club, the stadium remained property of the previous owner.

Charlton therefore moved to Selhurst Park in 1985 to ground share with Crystal Palace. The club got hold again of The Valley in 1988, but the stadium had then fallen into disrepair and a proposed redevelopment was blocked by the local Greenwich council.

Charlton fans therefore founded a new political party, and after it had gained several successes in the 1990 elections, the local council finally approved the plans. The club played one more year at Upton Park, but finally moved back to a renovated The Valley in 1992.

Proper redevelopment works started soon after with the construction of a new East Stand, and continued in 1998 with the erection of a new two-tiered West Stand. The North Stand got rebuilt soon after, and then linked up with the West and East Stand.

In the mid 2000s, Charlton presented plans to create a fully enclosed 40,000-seater stadium by rebuilding the East Stand and Jimmy Seed Stand, but plans were never realised due to the relegation of the club.

(photos of the present The Valley below)

How to get to the Valley

The Valley is located in the south-east of London on the south bank of the river Thames. The stadium lies about 6 kilometres from central London and 2 kilometres east of Greenwich.

Charlton Rail station is a small walk away from the station. There is frequent service to Charlton from Cannon Street, London Bridge, and Lewisham stations, and rather frequent service from Charing Cross and Waterloo East stations. The journey takes 15 to 25 minutes depending on where you get on.

Tickets are also available on the gate on the day of the match. Charlton rarely sell out.

Ticket prices range from £17.00 for a seat in one of the corners to £29.00 for a central seat at the main stand. Prices are increased with £3.00 for a number of high-profile games. Tickets are £3.00 more expensive if bought on the day of the match.

Photos of The Valley