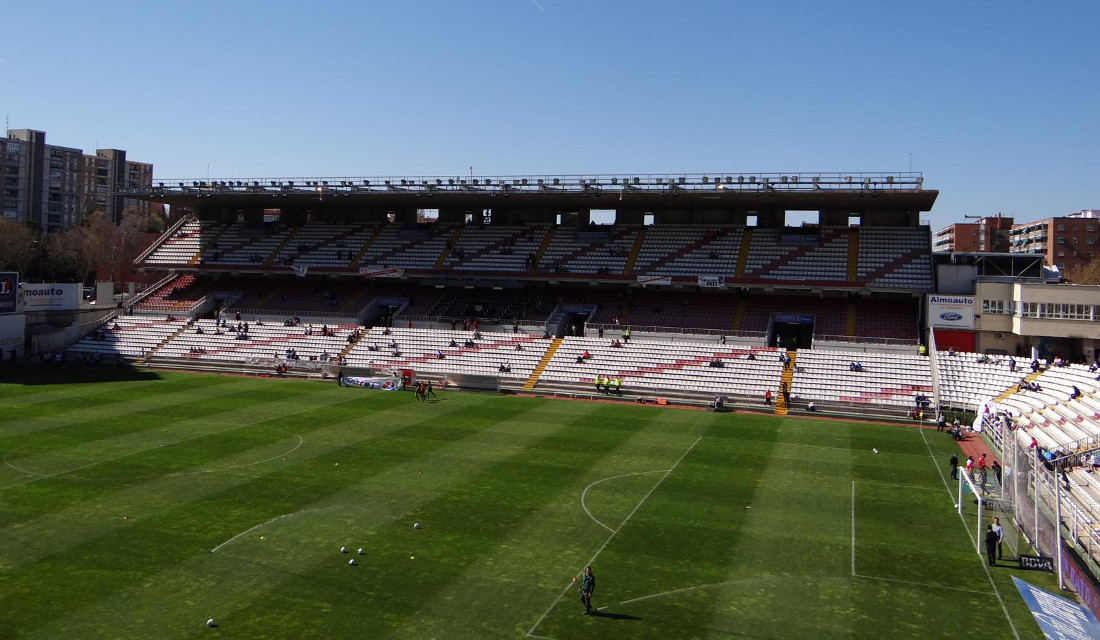 Campo de Futbol de Vallecas, previously also called Estadio Teresa Rivero, was built in the mid 1970s at the site of Rayo’s old Campo de Vallecas. The new stadium officially opened on 10 May 1976 with a match between Rayo and Valladolid (0-1).

Estadio de Vallecas could originally hold 20,000 people, and did not change until the standing areas got converted into seating in 1996. This reduced capacity to 15,500 seats.

In 2011, Rayo was the last club in Spain to remove the perimeter fencing separating the pitch from the stands. However, due to regulations that require a certain distance between players and spectators, this meant that the bottom two rows of seats had to be removed, reducing the capacity further to its current total.

The stadium was renamed in 1994 when Teresa Rivero became President of the club, the first female President of a Primera División team. As a result, Rayo decided to rename the stadium in her honour. After she left in 2011, Rayo’s club members voted to reinstate the original name.

How to get to Estadio de Vallecas

Estadio de Vallecas is located south-east of Madrid’s city centre at about 5 kilometres from the central Puerta del Sol square and 3 kilometres from Atocha rail station.

The stadium lies on the Avenida de la Albufera, which runs in one straight line from Atocha rail station (though its western part is called Avenida de la Ciudad de Barcelona).

The Avenida de la Albufera connects with the M40 motorway about 2 kilometres further east and with the M30 about a kilometre west.

If using public transport, which is recommended, the stadium can be reached with metro line 1. Line 1 can be boarded at city centre stops Sol and Gran Via. The stadium lies right next to stop Portazgo. The journey from the centre takes about 20 minutes.

From Plaza de Cibeles, Vallecas can also be reached with bus 10. Get off at Arroyo Olivar – C. Martin Alvarez.

From Atocha rail station, use bus 54. Get off at Av de la Alburfera – Rayo Vallecano.

Finally, from Cercanía stop El Pozo, which lies about 2 kilometres south of the stadium, take bus 136.

Estadio de Vallecas is located in a densely-populated Madrid neighbourhood, which means that there is the usual variety of typical local bars and restaurants around. The stadium is easily reached by metro from Madrid’s centre though, which has much more to offer in terms of eating and drinking.

Hotel NH Pacifico is located at a reasonable 15-minute walk from Estadio de Vallecas, but further options are slim. Otherwise, any hotel in Madrid’s city centre or close to metro line 1 will get you quickly enough to the stadium. Click here to explore the possibilities.

Tickets for Rayo Vallecano games can be bought at the ticket windows (taquillas) of Estadio de Vallecas in the week before the match. The taquillas tend to be open in the morning and evening hours, but close in the afternoon.

Tickets can also be bought on the gate on the day of the match. Rayo don’t normally sell out.

Ticket prices depend on the opponent, but for a typical match range from €20.00 for a seat behind the goal to €40,00 for a seat at the main stand.