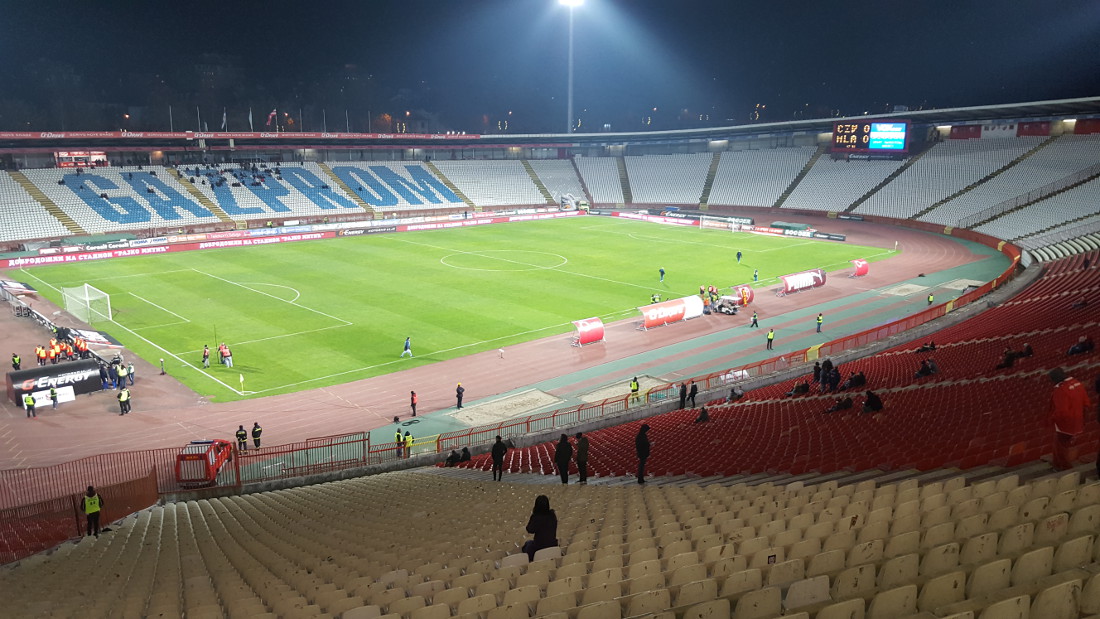 The Jugoslavija Stadium had been built in 1927, and been occupied by Crvena Zvezda from 1945. The stadium got demolished in 1959 and on its foundations a new stadium was built.

Stadion Crvena Zvezda opened four years later, on 1 September 1963, with a match between Crvena Zvezda and Rijeka (2-1). The semi-completed stadium could then hold about 74,000 spectators, but was completed one year later with an increased capacity of 110,000 places.

Due to its large capacity, the stadium got quickly compared with Rio de Janeiro’s Maracanã, and thus earned itself the nickname Marakana.

In 1973, Stadion Crvena Zvezda hosted the European Cup final between Ajax and Juventus (1-0).

Three years later, the stadium hosted the semi-final and final of the 1976 European Championships. In the final Czechoslovakia beat Germany on penalties with Czechoslovakia player Antonin Panenka gaining fame with his chip shot penalty.

Over the years, capacity of the stadium has gradually been reduced, first through safety measures and later through the conversion of the standing areas to seats.

How to get to Stadion Rajko Mitic

Stadion Rajko Mitic is located toward the south of the city of Belgrade at about 3.5 kilometres from the main railway station and city centre.

It’s a significant but doable walk from the railway station or southern parts of the city centre, roughly 40 minutes. The walk from the the Saint Sava Church, one of Belgrade’s major landmarks, which is located in Belgrade’s south, takes about 25 minutes.

The stadium can be reached with tram 9, 10, and 14 (all in the direction of Banjica). Tram 9 departs from the main railway station, tram 10 from the historic centre (e.g. Cara Dusana street), and tram 14 from Tašmajdan Park (which line 10 also passes). Get off at the Trg Oslobodenja square shortly after having passed the E-75 motorway.

Alternatively, you can take either trolleybus 40 or 41. Bus 40 can be taken from Takovska avenue west of the city centre and bus 41 from Trg Studentski square right in the city centre.

Stadion Rajko Mitic is located in a quiet leafy residential neighbourhood, and apart from the odd local bar or eatery, there is little around in terms of eating and drinking, which is better done in central Belgrade. The stadium of rivals Partizan, Stadion Partizana, is located just a few blocks away.

There are no proper hotels directly near the stadium, but a good few apartment rentals and small B&Bs like B&B Klub 101. A little up the hill towards the city centre near the Saint Sava Church, however, there are some decent hotels to choose from such as Hotel Crystal, Garni Hotel, Saint TEN Hotel, and Hotel Slavija Garni. Click here for an overview of hotels near Stadion Rajko Mitic.

Of course, if you are planning to spend more time in Belgrade, you’re likely better off picking something more central, and if you pick something around the southern side of the city centre, you are still at walking distance from the stadium. Click here for an overview of hotels in Belgrade.

Tickets for Red Star games can be bought online, or in person at the ticket windows of the stadium on the day before the match or on the day of the match.

Apart from the derby against Partizan, Red Star rarely sell out and booking in advance won’t be necessary.

Ticket prices tend to range from RSD 100 to RSD 200, though will be increased for high-profile matches. Expect to pay at least RSD 500 for the derby versus Partizan.